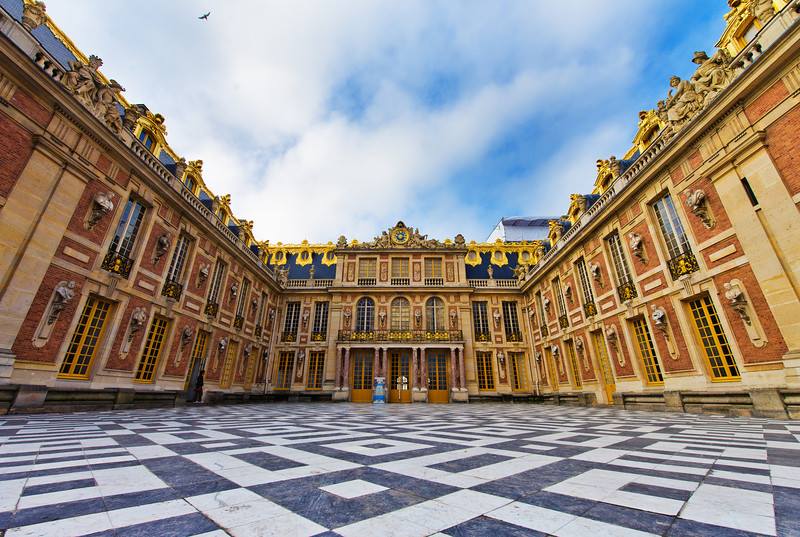 We are dedicating this article to the Castle of Versailles. The Palace of Versailles is located just 25 miles southwest of Paris. Also, it is one of the most beautiful monuments in France. Due to the many consecutive wars and the French Revolution, it was never actually completed. Nevertheless, it remains one of the finest jewels of the French Crown and one of the most stunning projects undertaken by the Sun King, Louis XIV.

The Choice of Versailles

When Louis XIV set his sights on Versailles, he was already familiar with the area. Indeed, his father, Louis XIII, had built a hunting lodge there. He enjoyed the serenity of the somewhat wild surroundings there. But Louis XIV wanted to make Versailles the most beautiful palace in the world; a symbol of his almighty power as well as the official residence of the kingdom. This stirred up real controversy, however discreet, as no one would dare argue with his Majesty. “Why Versailles?” inquired the courtiers and ministers. The place was far from Paris and was marshy and wild. Ironically, in old French, the word “Versail” means “land where the weeds have been pulled.”

The existing small castle did not in any way hint at the pomp and splendor of the Versailles that Louis XIV had in mind to build. The King envisioned the estate as the ideal setting to reign as absolute master. His childhood memories included the sad episodes of “the Fronde” revolt and the plots to destabilize the monarchy. Paris remained a politically uncertain environment, but by housing his ministers and his court at Versailles, he could centralize his power and protect himself against any potential act of treason.

A Palace for the Sun King

The building renovation and expansion began in 1661. As soon as he got married, the King delighted in bringing the Queen and the court to Versailles. Four years later, the first celebrations that would mark the reign of Louis XIV were organized. They were so sumptuous that they quickly became a topic of conversation throughout Europe. However, the accommodations soon became too cramped, and when the King told his minister, Colbert, that he wished to hold his meetings at Versailles. It was once again time to build more additions and embellish the property.

The surface area of the original castle was quintupled with the construction of stone buildings that fit around it and was transformed over the years. Its baroque style epitomized harmony, perfection, and delight. The location of the King’s apartments in the center of the castle symbolized his absolute power. As the sun was the monarch’s symbol, each room in his apartments was devoted to one of the seven planets that revolve around the magical star and offers a virtual tour in the heart of mythology.

The Hall of Mirrors

Originally, the old castle was surrounded by two perfectly symmetrical buildings, connected by a large terrace. Unfortunately, it did not make sense to keep the terrace open because of the local climate, and so it was enclosed to become a sumptuous room, probably the most beautiful in the castle, in line with the King’s apartments.

This great hall is entered through the War Room and is exited through the Peace Room that leads to the Queen’s apartments. Known as the “Hall of the Lost Footsteps”, this long room was used to receive visiting ambassadors, or to host royal wedding celebrations. It perfectly illustrated the King’s wish to dazzle and mark his power. The 17 arcades decorated with mirrors that majestically alternate with 17 windows over 240 feet represent a real technical feat. Louis XIV had these made by local manufacturers, a tremendous revenge on the rival Italian ones.

All is splendor, beauty, and sophistication: The chandeliers, the marble, the bronze, the gilding, and the large paintings recalling French victories. Probably the only marvel missing today is the chiseled silver throne; in front of which Louis XIV would stand to welcome the personalities of the world. Like many other of the castle’s pieces of furniture, it was melted to help finance the war.

The Gardens and The Fountains of Versailles

During the expansion and embellishment of the castle, Louis XIV entrusted the creation of the gardens to Le Nôtre. It took 20 years for him to achieve this absolute masterpiece, where all is once again perfection, symmetry, and harmony. The gardens were designed for walking, while the flower beds were designed to highlight the castle. More than 300 statues, vases, and busts decorate the paths. Water was also omnipresent with 1,400 fountains and waterfalls (only 607 of them remain today) as an integral part of the production.

The sun theme is honored in the gardens as it is inside the castle. Every path offered the stroller its own allegorical figure; every clump of trees hid its own mythological legend. All was elegant, majestic, and a symbol of the almighty King. This all took 6.2 million liters of water per hour to run. The King did not want to waste this valuable liquid, as water was so rare at the time, so he ordered that only the fountains he passed on his daily strolls be activated.

The Castle of Versailles is one of the largest in the world with 700 rooms, more than 2,000 windows, 1,250 chimneys, 67 staircases, and 19,800 acres of grounds. However, at the time, 3,000 princes, courtiers, ministers, and servants lived there permanently. A room became a precious commodity, and intrigues increased as a result. It seemed that there were no holds barred in getting an apartment, or a room without any comfort, or even a closet space, and cohabitation was not always easy.

One might try their luck at cards, or bribe, or actually threaten, all the while watching for the departure or death of another courtier. The most coveted spaces were those close to the King’s apartments; as important as it was to see the King, it was far more important to be seen by him! To be present at the King’s levee, or meals, or bedtime was more than an honor. It was an absolute necessity. In addition to the political consideration, there was also an economic one. Living at the castle saved one from the cost of the horse and carriage that would otherwise become necessary to travel from one’s townhouse to the court every day.

The Dangerous Games of Love

Only a marriage between the King of France and the Infanta Maria Theresa of Spain could stop the bloody and ruinously expensive war between these two countries that had been going on for 20 years. The heart of Louis XIV belonged to another; the reasons of State won over love, and their marriage was consecrated in 1660. It wasn’t long before rumors of the King’s infidelity spread across the court.

When the castle of Versailles was enlarged, he had various secret galleries built near his apartment to allow his many courtesans to meet up with him. The two most famous to be forever associated with the Sun King are Louise de la Vallière, and Madame de Montespan. The first was only 17 years old when she became the King’s mistress. She was gentle, in love and faithful. The second was the complete opposite, which was probably what charmed the monarch. Or perhaps it was the black masses that she had said or the love potions concocted by La Voisin, a witch, that she slipped into the King’s food to make sure he stayed in love with her.

On February 22, 1680, La Voisin was burned on the Place of Grève, in Paris, but Madame de Montespan escaped the stake. The King was so horrified by the revelations of La Voisin’s accomplices, that he had the trials stopped and all the compromising documents burned.

When the King settled down in Versailles, in 1682, he ordered the doors of the castle open to the people. Anyone who wished to visit his residence could do so. The gates were therefore kept open all day, with guards at the entrances to protect the King. They made sure no firearm was brought inside the castle, and checked the horse-drawn coaches authorized to enter the courtyard. Even the most humble of the King’s subjects were allowed to enter as long as they followed proper etiquette.

For instance, all visitors were required to wear a hat and sword; these could be rented at the entrance if needed. Everything was organized to allow a great many visitors to be part of the daily life of the royal family. Every room in the castle was decorated with the most refined paintings, tapestries, and sculptures; works of the most admired Italian and French artists of the time. The art collection was so great that as early as 1690, a guide was made available to the visitors; free of charge.

At the age of five, Louis XIV marked the start of the longest reign in the history of France. More than 70 years of absolute power, during which he turned France into the greatest economic and military power in Europe, and embarked on great projects of modernization. Though intrigues and wars cast a shadow on the end of his reign, the Sun King devoted himself to the Castle of Versailles for 50 of his ruling years, to offer France the most prestigious symbol of his undisputed power. Today, you may visit Versailles all year long.