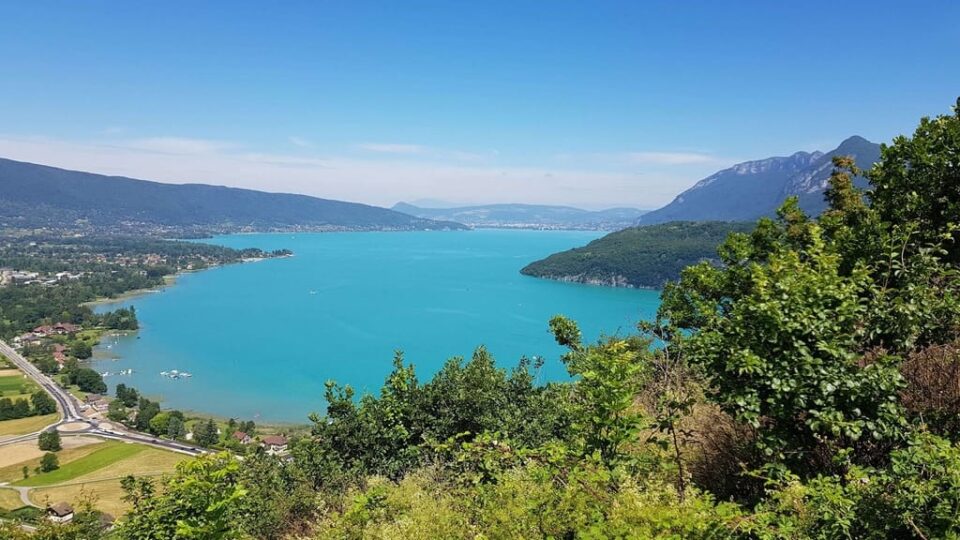 Lake Annecy is one of France’s largest and cleanest lakes. It sits amid snow-capped mountains and duly enjoys the epithet as Europe’s cleanest lake. As painted by Paul Cézanne, Lake Annecy is partly surrounded by a cycle path that course beyond Saint-Jorioz. This is part of the UNESCO Prehistoric Pile Dwellings in and around the Alps.

In the late 1950s, Lake Annecy suffered heavily from pollution and experienced the vanishing of its wildlife. This prompted the local authorities to make rigorous plans in cleaning it up. Fortunately, the executions worked well, and Lake Annecy has become one of the purest lakes in Europe. Its fish and bird-life are also back. The challenge on the hands of authorities now is how to find the required balance between the heightened tourism level and housing development around its shores. The preservation of the lake’s natural environment is another pressing issue.

Things To Know About Lake Annecy

Lake Annecy is situated at an altitude of 446 meters above sea level and is overwhelmed by the Tournette Mountain (2351 m) and the Semnoz Mountain (1699 m) to the west as well as the extended needles of the Dents de Lanfon (1824 m) to the east. Even though it is smaller in size compared to the nearby Lake Geneva and Bourget, Lake Annecy is one of the largest lakes in France. At 3,350 meters, it is at its broadest between Veyrier and Sévrier, while at 800 meters, it is at its lowest between Roc de Chere and Duingt.

It is 15 m long and has a perimeter of 38 km. The lake’s area reaches 27.59 km2 (2,759 hectares) in comparison to Lake Bourget’s 44.5 km2 and Lake Geneva’s 581.3 km2. The lake is serviced by 7 major streams and by Boubioz- an expansive underwater spring that burbles up from a depth of around 80 m close to Annecy’s shops. The Thiou is the major outlet that flows through the historic old town of the city before reaching the Fier River in Annecy’s outskirts.

Lake Annecy is made up of two distinct basins:

Both basins are connected at the Strait of Duingt between Roc de Chere’s steep hill close to Talloires and Ruphy Castle’s peninsula. Meanwhile, the Petit Lac features a more plain presentation where its shores are adjoined by steep wooded mountains. This is unlike the shores of the Grand Lac that are broad enough to support cultivation and villages.

Major Sights in the Area of Lake Annecy

For the most scintillating experience of the lake, there are two options: a cruise from Annecy or drive around Lake Annecy with stops at Talloires, Veyrier, Duingt, Menthon, le Bout-du-Lac, and Sévrier.

Annecy, the Venice of the Alps

Annecy is one of the country’s most touristic towns with its flower-embellished canals traversing the medieval old town. Grouped afoot its massive castle, the ‘Venice of the Alps’ are historic churches and buildings like the sanctuary of Notre-Dame, Palais de l’Île, and St. Claire Gate. The lawns of the Paquier and the Jardins de l’Europe offer splendid views over the clear and the encircled mountains.

The West Side of the Lake

Lake Annecy’s eastern shore has several sunshine and ranges from Veyrier-du-Lac to the commune of Verthier. There are three significant villages: Menthon-Daint-Bernard, Veyrier-du-Lac, and Talloires, all located afoot the tall mountains of the Prealps.

From an erstwhile wine-growing village, Veyrier-du-Lac has assumed an affluent residential outskirts of Annecy. Spanning for 5 km along the D909 road, Veyrier-du-Lac is a famous tourist destination with accommodation and gastronomic facilities.

There are three spots to visit in the fine village of Menthon-Saint-Bernard: the beach and promenade, the lakeshore with its harbor, and the medieval town castle of Menthon. Today the 1200s castle is owned and managed by the Menthon dynasty who, in 1190, came from Burgundy.

Between Talloires and Menthon, the craggy hill of Roc de Chere covered with hundreds of forest, providing fantastic views over the lake. Given the conducive climate, Mediterranean and mountain species of animals stay in the same habitat. Consequently, there has been a natural reserve where forest wildlife stay.

The petit lakeside village of Talloires is located in a beguiling setting at the foot of the rocky ridges of the Dents de Lanfon. Its small marina looks the stately silhouette of Duingt’s Ruphy castle. The village has several celebrated restaurants and hotels and can be reached by boat from Annecy. The village is also overlooked by St Germain’s shrine. The church terrace overtops beautiful views of the castle of Duingt and the Bay of Talloires.

The East Side of the Lake

Lake Annecy’s eastern shore spans from Sévrier to Le Boutdu-Lac (commune of Lathuile) and trails the slopes of the Semnoz Mountain and the Taillefer Ridge.

A residential outskirt of Annecy, Sévrier is traversed by the cycling path connecting Annecy to Faverges. Situated on Place de l’église, the Ecomuseum of Lake Annecy highlights a broad collection of items and old local customs with entertainment and reenactments of everyday life in the 1800s. The Paccard Museum, located outside the village nearby Saint-Jorioz, is earmarked to the terrific story of the Paccard Bell Foundry.

The small town of Saint-Joroiz is one of the ways to reach the Regional Natural Park of the Bauges by road. It covers the Prealps massif between Albertville, Chambéry, and Annecy. The lake’s biggest marina with 368 mooring rings is the curve-shaped harbor. The ‘Sentier des Roselieres’ (Roselieres footpath) begins at the marina and follows the lake’s shore with stunning views over the Tournette and the Dents de Lanfon.

Going over 3 km, the path adjoins the lake’s largest red beds that provide shelter and cover to water birds. Many informative panels highlighting the natural environment of the lake are marked along the way. The reeds have an unmissable role here by being a natural cleaning agent in the lake. This is part of why the water is pure.

The interesting village of Duingt has a pleasant setting, tucked away between the last slopes of the Taillefer Mountain and Lake Annecy. Duingt is a small spot that still has several typical Savoyard houses from the 1600s to the 1700s which are along the narrow and old streets. The Dhéré and Ruphy are the two private castles in the commune.

Located at the southern end of Lake Annecy, the area of ‘Bout-du-Lac’ (end of the Lake) is owned by the commune of Lathuile. Visitors can also find a camping site and a widely known beach in the summertime.

In Doussard, the marshlands are a secured natural reserve. All year round, visitors can explore this part of the lake by strolling on the identified paths. From atop an old watchtower, a stunning view of the lake expects you.

Annecy Mountains (the Prealps of Annecy)

The lake of Annecy is encircled by several majestic mountains that offer phenomenal views over the lake and the surrounding peaks of the French Alps.

Mount Semnoz is about 16 km long and elevates to 1699 m above sea level at Cret de Chatillon. The peak is accessible by vehicles and gives spellbinding views over the French northern Alps from Mont-Blanc to the Vanose and Écrins massifs. Only a little part of Lake Annecy can be seen (Duingt). Walk to the Belvedere de Benevent for a better view of the lake. It can be reached on the way down to Annecy through a ‘route forestiere’.

Two mountains towering above the village of Veyrier-du-Lac are connected by a ridge that is referred to as the ‘sentier des cretes’. The Mount Baron Belvedere (1254 m) provides a ravishing view over Annecy, the Bauges massif on a side, the Mont-Blanc on one side, and the Aravis on the other.

Col de la Forclaz also called the Forclaz Pass (1150 m) is located between Montmin on the D4 road and Talloires. The view from the belvedere shows the whole lake, the Arcalod, and the peaks of the Bauges massif, the Tournette, and the Dents de Lanfon.

The highest peak of the mountains surrounding Lake Annecy is the Tournette mountain (2351 m). With its shape looking like an armchair, it can be seen from the city of Annecy and the western shore.

Its peak is accessible by a steep and sometimes difficult path, the top having metal stairs and a chain to cling to. From the summit, the phenomenal view spans from the Semnoz to the Lake on a side and to Mont-Blanc and the Arvais on the other. The Tournette is among the unique mountains you will ever climb.

Lake Annecy one of the cleanest lakes in France. It is also among the largest lakes in Europe. Thanks to the efforts of the local administration, Lake Annecy is environmentally protected despite being a high-level tourist destination. Apart from the man-made additions, a quintessential biological agent is responsible for the lake’s crystal-clear waters. The reeds serve a natural cleaning function in the lake to make the water pure. Do not forget to stop by at Lake Annecy when next you travel to the French Alps. You will be stunned by nature. 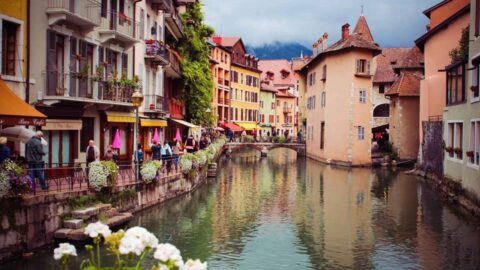 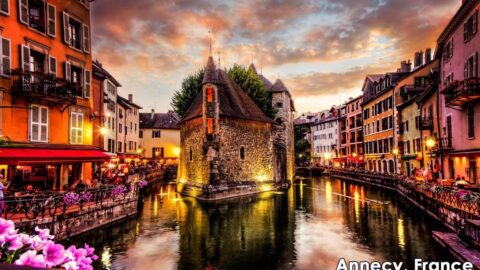 What is Annecy Famous For?

Is Annecy Worth Visiting? 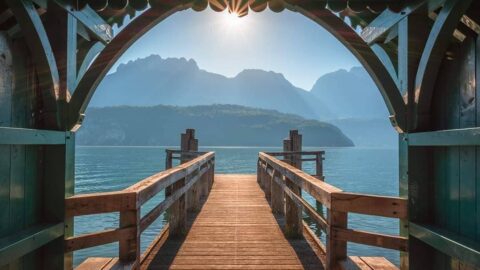