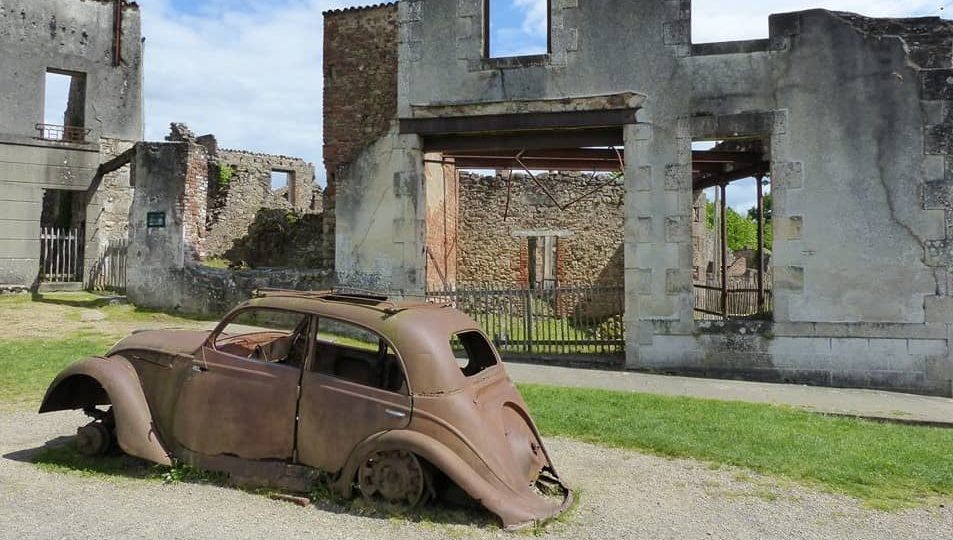 Visiting France for vacation is definitely an experience to look forward to. While it offers luxury, calm, terrific sights, and phenomenal hospitality, there are chilling things that will provoke reflection.

The story behind the village of Oradour-Sur-Glane is that of fear and terror that one would almost conjure. Today, the site tells the tale of a cruel and deadly error of the entire Second World War.

The village was completely destroyed during the German occupation of France in the war. There, a brutal mass murder that included children and women took place. Today Oradour-Sur-Glane is preserved as a museum to pay homage to the victims of the June 10, 1944 massacre.

According to multiple reports, soldiers of the Der Führer Regiment of the 2nd Waffen-SS Panzer Division, Das Reich, barged into the village and massacred 642 women, children, and men. The soldiers rounded up men and separated them from the rest who were led to the village’s chapel. Subsequently, the chapel was set ablaze, and while the victims tried to leave the building, they were maliciously gunned down by machine gun.

Meanwhile, the men were lined up and shot dead with automatic weapons. As if all that was not enough, the whole Oradour-Sur-Glane was burned down by flamethrower. The first thing the Nazis did was to block the exits of the village to prevent anyone from escaping. Then they conducted identity checks on everyone, including babies, the elderly, and the sick.

Even though most of the inhabitants complied peacefully, about 20 people Survived the onslaught. The unintended Survivors comprised of few children and some men who are said to crawl into a system of rabbit hutches to beat the inSurgency.

Upon arrival, you will enter through a big facility with the basic amenities of a major tourist attraction. Strolling through the facility, you will reach a walled town, and you will be utterly surprised at what you will see. The site is apocalyptical in every sense of the world as everything is in ruins.

From street to street, you will see houses strewn with rubble and leveled to the ground. It looks like the village was hit by barrages of bombs. Only metal objects like a grotesque sewing machine and burned cars remain. You might see an old Peugeot that is said to be owned by a doctor who visited a patient in Oradour-Sur-Glane just as the residents were being rounded up.

As you proceed to the different streets, you might also see the tram tracks that lead to the hilly streets. When you visit, you will have the opportunity to listen to a commentary in English or French. One will feel the sadness in the air at the thought of the slain population grips.

After the Second World War, a trial was held in 1953, which included the Surviving members of the Waffen-SS. An explanation was made as to why the hostility occurred, and it was confirmed that Oradour-Sur-Glane was a mistaken location.

Oradour-Sur-Glane was rebuilt close by, and the remains of the old ones are still there. It has become a national shrine, bearing the name ‘Village Martyr Oradour-Sur-Glane’. This place is the country’s most chilling and dark tourism spots.

Aside from walking through the empty village, there is a Memorial Center and the modern museum that recounts the tragic history of the place. There is also the Alsace-Moselle Memorial, which has a segment on Alsace soldiers’ involvement in the war. It also tells of how they were drafted into the army against their wish.

Every day between 9:00 am and 7:00 pm, the Memorial Center is open in the summer. But it closes earlier outside of the high season in the summer. You should also know that the old village ruins can be reached anytime for free, but some parts may sometimes be blocked for maintenance. The ruins are preserved so they would not disintegrate.

Chambre d’hôtes Le Queyroix-Martin: This hotel is situated in Vaulry in the Monts de Blond, just about 20 minutes by car north of the village. It used to be a built barn but now has 3 double rooms that are all furnished with facilities. You should also know that evening meals can be reserved in advance at the hotel.

Villechenoux: Villechenoux is a British-owned family breakfast and bed establishment situated close to Nantiat, just 25 minutes away from the village.

La Residence Limousin:  This hotel is a top-rated one situated in a stunning walled garden right in the middle of the medieval town of St Yrieix la Perche managed by a British/Canadian couple.

Riverside Lets: A British family manages these two properties, seated on river Gartempe’s banks. From La Souterraine, Riverside Lets is 10 minutes by car and 40 from Limoges.

Les Trois Chenes: Set within 1.5 ha of lush meadows and gardens at Videx, Les Trois is a stone-built house breakfast and bed as well as a holiday cottage. It is located in the center of France within the walls of Perigord-Limousin Natural Park and just about 40 minutes from Oradour-Sur-Glane.

Plantagenet Manor: This hotel will afford you a personal self-catering 8 bedroom with a Roman-style pool. It is located in Chalus, a town 40 minutes close to Oradour-Sur-Glane.

Another reason to visit Haute-Vienne in the southwest of France is to witness the atrocities of the Nazis. The government has ensured that the site is preserved as a tribute to the deceased. Visitors will also have a fresh insight into the misfortunes of war. They will walk through Oradour-Sur-Glane’s ruins and as they observe silence and see plants prod through crumbling stones and empty widows while the birds chirp. Not everything is dead in the village, after all.