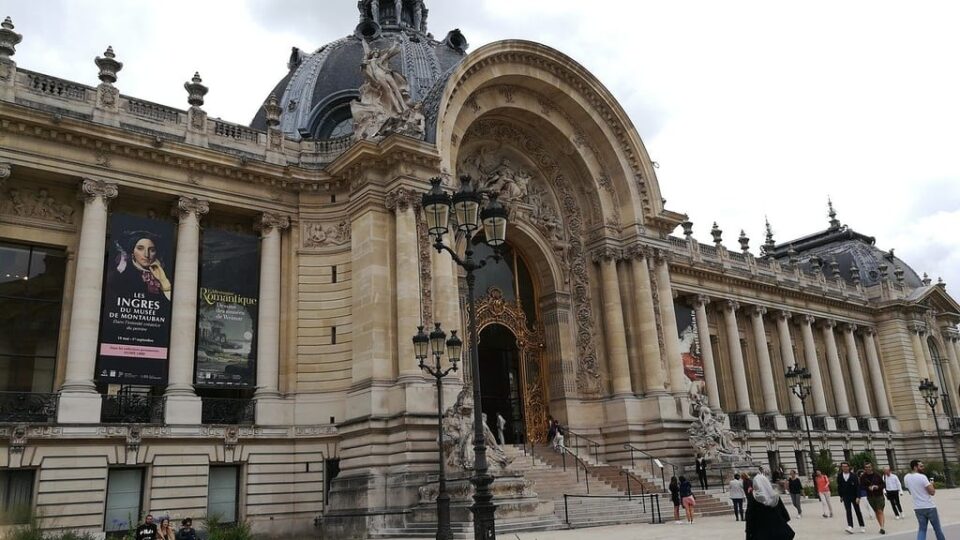 Adjust your itinerary if you are in Paris but not been to the Grand Palais. It is easily one of the best things to see in the 8th arrondissement. Also known as the Grand Palais des Champs-Élysées, this historic site has a museum complex and an exhibition hall that attracts millions of visitors from across the world every year. They seem to think that it is worth visiting!

When you get to Champs Élysées, it is quite difficult to miss the Grand Palais with its Beaux-Arts dash architecture and a massive glass ceiling. In 1897, construction commenced on the building in preparation for the1900 edition of the Universal Exhibition. Now, it has become a historical site, an interesting museum, and a lively exhibition hall.

>>Also Read: Opera Palais Garnier: Inside the Most Beautiful Building in France

History of the Grand Palais

After the completion of the fair, many structures built for the 1900 Universal Exhibitions were torn down. But the Grand Palais was exempted. For the continent in the late 1800s, these world fairs were a point of contact for creatives to come together and express their latest innovations.

Under three years, the construction of the building was completed with 1,500 workers. And at the exhibitions, the appearance of Art Nouveau was often present. The same goes for the Grand Palais too. The structure’s façade features work by famous sculptors like Camille Lefèvre and Art Nouveau-esque ironwork.

Upon the completion of the Grand Palais, it served as an exhibition space in no time. The exhibitions were mostly about modern inventions, like aviation, the automobile, and household utensils. The popular Salon d’Automne- a yearly art exhibition which began in 1903 with pieces from artists like Albert Glees, Pierre Bonnard, Albert Marquet, and Henri Matisse- was hosted at the Grand Palais.

Before it hosted two Nazi propaganda exhibitions in the Second World War, the Grand Palais has earlier served as a military hospital in the First World War. In 2000, the Grand Palais was duly given the historic monument status that allowed the French government to proceed with the necessary renovation plans. And even though significant progress has been made, the monument is very much still undergoing restoration.

As visitors will see, the Grand Palais hosts art exhibitions, the Paris Photo (a yearly equestrian show), the biannual Chanel fashion shows, and many other activities and events. According to the Grand Palais, there is certainly something for anyone with exhibitions about fashion, fine arts, cinema, dance, music, theatre, and sports. With something for everyone, there is no excuse not to visit this part of the 8th district as soon as you can.

What is Inside the Grand Palais?

Visitors will find the Palais de la Decouverté at the west wing houses. It is a science museum that opened in 1937. The east wing is dedicated to fashion, art, and other events. A chunk of the high profile art and photography exhibitions are held here, from Anish Kapoor’s Leviathan to the first Henri Matisse retrospective after his demise. It is usually fun and fresh.

There is the Nef du Grand Palais. It is an event hall in the Grand Palais where different kinds of social and cultural events are held. This includes fashion shows, the Antiquarian Biennial, and the Contemporary Art Fair. The highlight of this part is the steel and glass dome ceiling that covers the Galeries Nationales segment too.

How Is It Mapped Out?

With the largest glass roof in the continent, Paris Biennale, the nave (home to the fashion shows), food festivals, book fairs, and more- you might think you are in a greenhouse. Therefore, space can get incredibly warm in the summertime, when the sun shines through the glass canopy. Other wings, like the science museum, feel regal but intimate and are just as significant for their architecture as they are for anything on display. As an example, the science museum has a grand, circular atrium and floors spread with a porcelain stoneware mosaic.

The crowds vary much, depending on what is on display. However, this is regularly a destination for art and culture enthusiasts who have already explored the French capital’s other major museums. But you do not have to be artsy before you visit and enjoy the Grand Palais. If you have lined up a visit to the monument, be prepared to be simply amazed. Plus, getting around the museum is easy, and there are enough spaces to sit.

Any Options For Food and Drinks?

The Seine-facing Mini Palais is the major restaurant around. In the warmer months, the terrace under the hanging imperial columns becomes one of the most-sought open-air dining spots in the Golden Triangle.

Things To Do Near Grand Palais

As soon as you complete your immersive tour of the Grand Palais while admiring its elegance and beauty, it wouldn’t be out of order to indulge in some mind-blowing activities near it:

The Alexandre III Bridge is an incredibly artistic sight that you will see. You can stroll around and have the most captivating view of the Seine River and the Eiffel Tower on the other side. If you have time to spare and what to just be by yourself, then walk around in this quiet environment. And it becomes even better if you love taking pictures. Visiting the bridge, you will have immense opportunities to get fantastic photos. Watch out for the highlight here- a gold-colored architecture that makes it even more ravishing. The bridge is 0.2 miles from the Grand Palais.

>>Also Read: The Most Beautiful Bridges in Paris

Take Pictures Under the Eiffel Tower

As you already know, visiting Paris without going to the Eiffel Tower will be remiss of you. Paris looks sublime from the Eiffel Tower. But some are of the view that going to the tower is not worth it. Regardless, the imposing monument is among the most romantic and breathtaking sights, especially at night.

The tower is the emblem of the city, and it was built to show the world the country’s industrial credentials. Gustave Eiffel (the French Engineer) made use of stone to build the entire tower also to show that the metal can be as strong as stone even though it is lighter. The Eiffel Tower is 0.98 miles from the Grand Palais.

This free historic art museum is located close to the Grand Palais. Here look at sculptures, art, and different artifacts before you step into the museum. As you will see, the building has quite a vintage look with a cracking Instagram-worthy setting. The Petit Palais is yet another paradise for genuine art lovers.

Art buffs will also be thrilled to see major French artworks. The bonus here is the free admission so you do not have to spend on another ticket. The Petit Palais gives you the freedom to explore the interesting museum as you like and see the art pieces you want to see and how you want to see them. Do not forget that the Petit Palace does not close for the day until 6 pm. Petit Palais is 0.09 miles from the Grand Palais.

Among the countless exceptional spots for fashion aficionados in Paris is Montaigne Avenue. It is walkable from the Grand Palais and closes to the Champs-Élysées. Montaigne Avenue is a street that has all the clothing and big fashion brands in the city. For those into high-end designer materials, you will doubtless hop from one shop to another because they are amazing.

Tourists highly rate the customer service here as the staff makes visitors feel at home. However, the cons of visiting here are the high price, which generally typifies shopping here. But that does not stop anyone from window shopping and looking at the trendiest fashion stuff and other cool accessories. Montaigne Avenue is located just 0.3 miles from the Grand Palais.

Bateau Mouche is a paradise for boat lovers. It has open excursion boats that allow visitors to have a ride around Paris. They also can start the trip in a boat on the Seine with water pouring around them. It is not something any tourist will want to miss out on in their time at the City of Light.

Is the Grand Palais Worth Visiting? – Summary