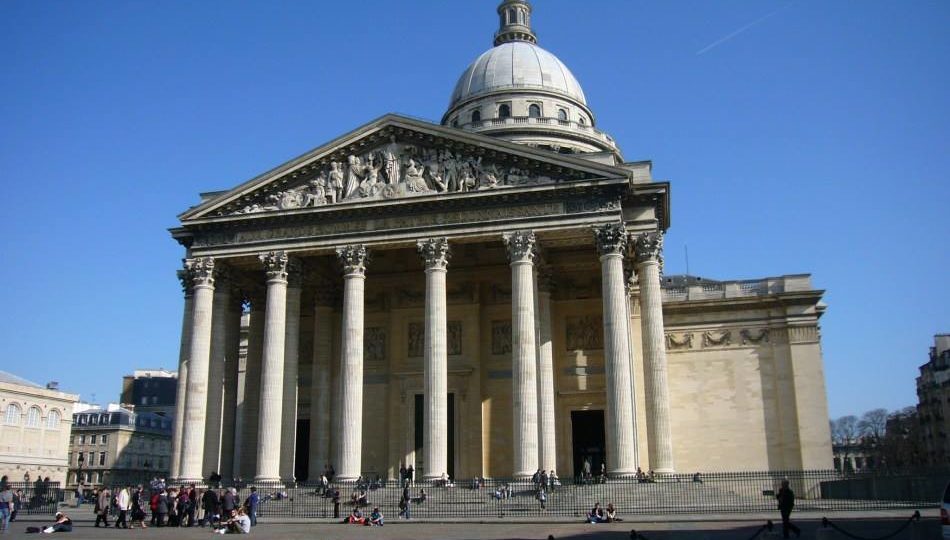 This month, as I was strolling through the Latin Quarter in Paris, I came up to the steps of this monument that stands on the St Genevieve hill and resembles a Greek temple. I found the history of this symbolic structure so fascinating that I must tell you about the exceptional circumstances surrounding its construction, as well as the reasons why its primary function was periodically redefined, depending on whether France was a kingdom or a republic. Let’s enter the Pantheon!

In August 1744, Louis XV was in Metz with his armed forces committed to battle in Austria’s war of succession, when he developed a high temperature. He was taken over by a mysterious disease, and his odds of survival were so low that he was given the last rites. In his prayers, the monarch promised to build a church dedicated to St Genevieve, the Patron Saint of Paris, should he be touched by God’s grace and survive. A few weeks later, a miracle happened. The king got rid of his disease and, little by little, made a full recovery! However, the years went by without a church being built.

The king really did intend to fulfill his promise, but after so many years of war, first, against Austria, and then against Prussia and England, the kingdoms’ coffers were depleted. This dire financial situation was aggravated by the fact that France had also lost its colonies in America and India in the process. Living conditions in France were so bad that he couldn’t possibly consider raising taxes. Casanova, better known in the collective memory for his legendary exploits as a gifted charmer, was also a skilled financier. He approached the king of France with a brilliant suggestion to replenish the country’s coffers.

Lottery in The Age of Enlightenment

The reign of Louis XV got off to a promising start. France was thriving in 1723 when Louis XV took over the reins of government at the age of fourteen. The young king enjoyed the confidence of his subjects, while the nobility, after decades of austerity and distrust, was very pleased to fully regain its place at the court then back in Paris. Societal salons grew in numbers, where attendees could participate in many conversations while enjoying chocolate, a delicious beverage that came straight from the Spanish colonies.

A group of philosophers decided to collaborate on a project to assemble all the knowledge acquired up until that day into a single work, to help make any and all discoveries accessible. Superstitions and naïve beliefs progressively gave way to real progress thanks to this Encyclopedia. In this Age of Enlightenment, if you happened to be a thinking man and, more importantly, a wealthy one, you were also in the mood for fun, pleasure, and money games. So, around 1760, when it became time to refill the kingdom’s coffers emptied by years of wars, Casanova suggested to the king that he take advantage of the current passion for one game, in particular, the lottery.

Even though it had been around for years, the novelty of this new lottery and the brilliant idea behind it was to add a percentage to the price of each purchased ticket that would be transferred to the State. This met with Louis XV’s approval, and the National Lottery was born. It encountered such success that it didn’t take long to accumulate enough funds to build the church that had been promised for so long.

A Church With the Airs of a Greek Temple

It took almost 15 years before Louis XV was finally able to honor St Genevieve. The king wanted a modern church built in the neoclassical architectural style so popular in the middle of the 18th century and largely inspired by a new desire to return to the glory of ancient times. He entrusted this mission to Jacques-Germain Soufflot, an architect who had studied antiquity and knew Italy very well. Soufflot drafted plans for a church that would be topped by a dome and would resemble a Greek temple with its particular columns and pediment. The interior floor plan was in the shape of a Greek cross with four arms equal in length and in width.

The clergy, however, turned down any plans for a church that wouldn’t follow the shape of a Latin cross. Soufflot had to revise his drawings, and decided to extend a span by about 65 ft in order to break this virtual cube that was most “uncatholic”. Once he overcame this challenge, he then had to deal with the instability of the clayey soil on which the structure was to be built. Finally, on September 6, 1764, or six years after work began, Louis XV came to symbolically lay the first stone of the church. He was standing on foundations that had to be reinforced with thousands of wood pillars.

A Church In The Midst of The French Revolution

It was finally a groundbreaking time, but the project had many detractors who were constantly questioning the stability of the site. How much time would it take before the monument would sink below grade, or the dome would collapse on the faithful? There were plenty of difficulties and plenty of critics, but work progressed nonetheless. In a sad twist of fate, Soufflot died on August 29, 1780. His assistant, Jean-Baptiste Rondelet, took his place and set about fulfilling his masters’ vision. The work was finally completed ten years later. The magnificent and majestic structure dwarfed the neighborhood, with its huge columns and its two front doors of almost 10 tons each, intended only to be open for grand ceremonies, as was customary in Ancient Greece.

The interior also resembled a Greek temple with huge Corinthian columns and a gigantic dome that weighed about 11,000 tons. The bell tower, the crosses, and the 42 windows that let divine light penetrate the space were all reminders that it was indeed a church, only it had yet to be consecrated. However, it was 1790, and France was at the height of the Revolution. To consecrate a church at this time of deep turmoil and visceral anticlericalism was unthinkable!

A Place for the Great Men of the Nation

The revolutionaries decided to make this Pantheon a place for the great men who had served the country, as opposed to a place for the gods. All the symbols alluding to the original religious vocation of the site were stripped, while 38 of the 42 windows were blocked, as the light was not supposed to penetrate a place of reverence. The first man that the “Assemblée” (the lower house of the French parliament) thought of “pantheonizing” was Voltaire.

After all, the poet and philosopher had denounced the injustices suffered by humanity and religious dogmas. However, there was a problem: Voltaire had never questioned the monarchy! That idea was consequently put on hold, but just for a while. On April 2, 1791, Mirabeau died. Now there was a great revolutionary who passed away and could be brought into the Pantheon with great pomp. Three months later, after many bitter talks and 13 years after his death, Voltaire became the second man to be “pantheonized”. A few months later, a secret correspondence between Mirabeau and the king of France emerged. The body of the traitor was immediately removed from the Pantheon and thrown into a communal grave.

During the Revolution, seven people were “pantheonized”, five of whom came back out of the Pantheon almost as fast as they had entered the place. By the time calm returned, only two men still rested in peace in the Pantheon: Voltaire and Jean-Jacques Rousseau, two prominent figures at complete opposite philosophical ends from the revolutionaries.

Church Or Pantheon, Based On the Interests of The Government

Napoleon, as an emperor, could not afford to get angry at the church. He set about returning the religious appearance to the upper part of the structure while letting the crypt remain a burial place for the empire’s leading dignitaries. A staircase was built to reach the crypt without passing through the area that was once again sacred. Louis XVIII didn’t want to hear about any Pantheon, he wanted to give back the original religious character to the entire structure. But what to do with the 42 bodies then buried in the basement? How could one possibly imagine Voltaire and Jean-Jacques Rousseau in a church?

Wood boards were installed to hide the two anticlerical philosophers. When he was king, Charles X gave the monument back to the French people, and it was once again the Pantheon. Then, on December 6, 1851, the future Napoleon III returned the building to the church. It would remain a church up until the death of Victor Hugo in 1885, at which time it reverted back to being the Pantheon so that the writer could be “pantheonized”. As might be expected, some changes were made to the structure with each role reversal. Paintings were hung and sculptures added when it was the Pantheon, while sacred attributes were brought in or restored when it was a church.

The Rights of the French Citizens

Today, the Pantheon seems to have found its vocation for all eternity, and anyone can potentially enter the Pantheon as long as he or she is a French citizen, and the request is submitted by a third party. Aside from meeting these two conditions, an eligible candidate would have to comply with a few other formalities. To be born anytime after 1789, to have been deceased for at least 10 years (time to make sure that the candidate did not prove to be unworthy), the name of the deceased must be well-known, and part or all of the body made available for burial. Of course, there are exceptions to every rule.

These include Voltaire and Jean-Jacques Rousseau, who died long before the Revolution, as well as “The Righteous” (as were called the French who didn’t hesitate to hide Jews during WWII) who were “pantheonized” in their lifetime. You can also see a moving statue in honor of the Unknown Soldier and all the soldiers who fought in WWI. The writer Saint Exupéry was “pantheonized” on an honorary basis as his body was never recovered.

Beyond its history and the 73 important figures who today rest in the crypt, the Pantheon is a grandiose monument in the tradition of Agrippa’s Pantheon in Rome. This masterpiece of architecture is open to the public every day, and offers, among other options, conference-visits in English. Furthermore, from the dome’s exterior colonnade, you can take in a large panoramic view of Paris. Finally, do not miss Foucault’s Pendulum, which quite simply explains the rotation of the Earth… Enjoy your visit!