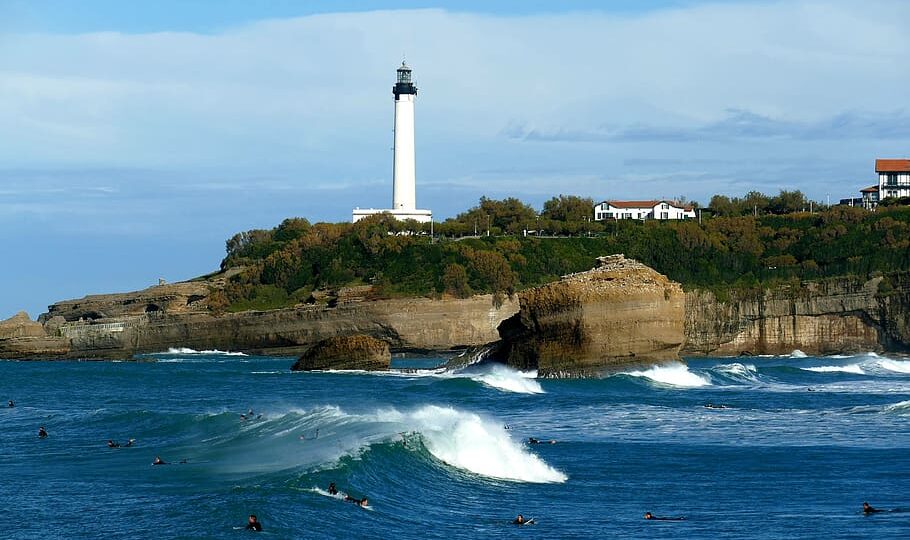 Located on the Atlantic Coast on the Bay of Biscay in southwestern France, the city of Biarritz is famous for many things that visitors will find enjoyable. Its olf-fashioned houses and high-class villas that dazzle with art deco and beautiful époque details have kept their glamour for centuries. Biarritz is mostly famous for its beaches and luxury hotels.

>>Also Read: Is Biarritz Worth Visiting?

Here are Some Things Biarritz is Famous For:

Plage du Miramar is a fantastic beach that is ideal for relaxation and savoring the soothing seaside breezes. Stretching from the Pointe Saint-Martin to the Hotel du Palais, this beach is famous for its breathtaking scenery and thrilling shore-braking waves. Even though the protected beach provides a sense of calm, rough seas and mighty current make swimming risky. Before approaching the water, consider the conditions of the current and waves.

Plage du Miramar appeals to spa-goers and sunbathers, who visit the Thalassa Sea and Spa center that is nearby. The beach is not as attractive to tourists as the Grande Plage and has the allure of an old-fashioned seaside resort- especially in the summer when vintage-esque beach tents appear. The Roche Ronde, a big rock, is off the coast and is a sheltered nature area and also a bird sanctuary.

The city’s most central beach is the Grand Plage that has appealed socialites, vacationers since the Belle Epoque. This broad sandy beach spans from Bellevue close to the Boulevard du General de Gaulle to the Hotel du Palais. The Grande Plage is covered with sunbathers and their colorful striped cabanas in the summer. You will see lifeguards on duty from May to October with more prolonged hours in the high season.

All the same, you should note that the Grand Plage has heavy surf and water safety is posted every day. In certain periods of strong currents, surfing swimming and bathing is not allowed. Close to the beach, the Quai de la Plage promenade is great for a walking tour. This broad pedestrian pathway affords views of the breaking waves and the Biarritz lighthouse afar off.

On natural elevation at the Grande Plage’s end is the Hotel du Palais. Made by Napoleon III for Eugenie, his wife, this beautiful palace is a national monument that characterizes the elegant class of the Second Empire. The building has converted to a hotel since 1893. The hotel is a five-star outfit that has two swimming pools, a spa, and a chic restaurant with splendid ocean views. Visitors are treated to the most exquisite Basque cuisine while watching the surfers hit the shore.

This typical Biarritz lighthouse stands at a significant location that looks over Cape Hainsart’s coastline. Built in 1834, the lighthouse at Pointe Saint-Martin’s summit, that marks a boundary between the craggy coastline to the north and Lande Coast’s sandy beaches to the south. Guests may mount the 248 steps of the lighthouse to absorb the scenery from this amazing vantage point. The 73-m high tower leads sweeping views of the Basque countryside and Biarritz.

Located in a ritzy 1600s building, this historic tearoom is among Biarritz’s oldest setups. The Miremont is famous for its timeless patisseries like Gateau Saint-Honoré, éclairs, and strawberry tart with an array of rare teas.

The Miremont was established in 1872 and was often visited by royal members during the city’s heydays. King Alphonso XIII, the Spanish monarch, enjoyed lunch here. King Edward VII of England frequented the Miremont’s tasteful French pastries as well. Added to the list of top persons that patronized the Miremont is Queen Nathalie of Serbia, who usually buys caramels for our friends and the Portuguese Queen Amelia, who was used to taking her tea at a window seat with the excellent views.

The Miremont’s dining room affords a view into Hotel du Palais and the Grande Plage beach. At the upper compartment of the building, there is the salon that has pastel pink décor and looks to be the fitting meeting spot of aristocratic women. You may want to have lunch or sample the pastries in the tea room when you visit. Going to the confections is easy, and the stall deals in gift boxes of caramels, chocolates, and other candies. The Miremont is at 1 Bis, Place Clémeceau, Biarritz.

Empress Eugénie (Napoleon III’s wife) ordered that the Imperial Chapel be created for her spiritual worship. It was built in 1865 and dedicated to the Virgin of Guadalupe, who is Mexico’s patron saint. This dramatic chapel displays the harmonious mix of architectural elements: Moorish design motifs, Romanesque- style arches, and flash Byzantine-style gilded mosaics. The ornate chronicles complement the charming interior, which astounds onlookers.

Chapelle Impériale is open for guided tours and visits. There, mass takes place four times a year on particular dates. January 9th to remember Napoleon III’s death, June 1st to commemorate the death of Louis-Napoleon Bonaparte who died in the Anglo-Zulu War, July 11th to mark the anniversary of Empress Eugenié’s death, and December 12th to commemorate the Feast Day of the Virgin of Guadalupe.

Before the Imperial Chapel was built, the Empress Eugénie, Emperor Napoleon III, and the royal family attended mass at the Eglise Saint-Eugénie close to the old port. In 1856 the chapel was inaugurated and is dedicated to the empress’ patron saint. Chapelle Impériale is located at Rue des Cent Gardes, Biarritz.

Featuring a Basque character, Saint-Jean-de-Luz is an old fishing village with a deep history. Visitors will enjoy the vibrant atmosphere, tasty delicacies, and the local culture. The village is also a popular summertime destination with inviting sandy beaches with calm waters. Here, the beaches are great for swimming, and it attracts families with children.

Saint-Jean-de-Luz is not far from Biarritz as it is just a 30-minute drive south of the city. The place is worth exploring to witness the striking local Basque seaside town that is dissimilar to the flashy resort of Biarritz.

The Eglise Orthodox de Biarritz is a Byzantine-esque Russian orthodox sanctuary that was built by the popular Biarritz native architect, Tisnés. It was built in 1892 for a community of Russian immigrants who were mostly aristocrats. Sliding icons from Saint Petersburg decorate the interior as though a jewel box were shining. From 3:30 pm to 6 pm, this sanctuary is open for public visits. Eglise Orthodox de Biarritz is located at 8 Avenue de I’Impératrice and offers prayer services every day.

This is a little sheltered beach called Le Port Vieux; an excellent choice for families with kids. The beach is in a rocky inlet of the Old Harbor (Port Vieux) close to the Biarritz’s center. Given the beach’s sheltered cove, the waves are often calm, and the waters are safer than the Plage du Miramar and the Grande Plage. The conditions here are often gentle enough for swimming, and the shallow parts are safe for children to splash around and bathe under guidance.

Since the Old Harbor is less visited than other beaches in the city, it is perfect relaxation in the summer. Another brilliant beach for the kids is the Plage de la Milady that affords a seaside playground and boardwalk. Swimming and bathing is allowed only when the waters are calm.

What is Biarritz Famous For – Summary

Biarritz has a strong character that is not hard to miss when you visit. While you may say it owns much of its class and luxury to Empress Eugenie’s spiffy inclinations and her husband’s dashing taste since the 19th-century, Biarritz rather has a long history of elegance and grandeur. Today from kids, surfers, relaxation hunters, luxury travelers, to first-time tourists, there is something famous about the city that everyone will find fabulous. 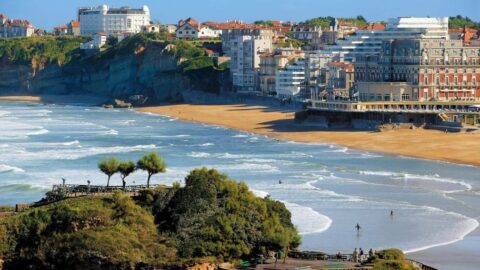 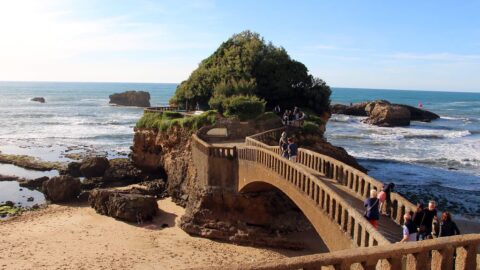 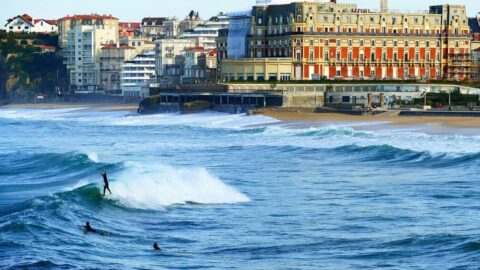 Is Biarritz Worth Visiting? 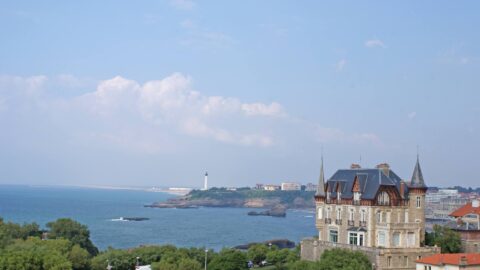