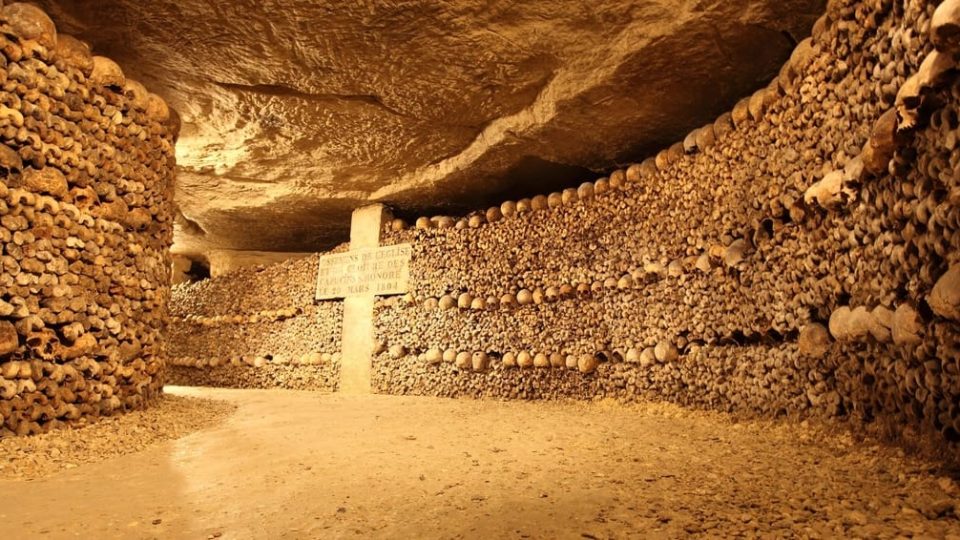 There is more to Paris than the scintillating fares, wonderful treats, and phenomenal monuments. There are secrets below the city to discover which many tourists have overlooked for far too long. Every day, many locals and visitors are oblivious that they roam directly above a long strip of underground tunnels that contain 6 million skeletons (and an interesting story as to how they got there).

This is about a dark history that usually goes without observation as busy people walk to work and go about their daily businesses while a very mysterious world is wedged just beneath them. These tunnels are referred to as the Paris Catacombs, and there is usually a long queue who wants to see the creepy world trapped underneath. To beat the queue, ensure you book online.

We hope you won’t pass on this gripping encounter with history when next you visit the French capital.

Here are why you should visit the Paris Catacombs:

The Catacombs are the real hidden parts of Paris, and the entire experience is a solo tour where one gets to walk through at their own pace. When you get in, you enter a long chain of tunnels, bearing signposts and history boards telling you a bit more about the place.

Just about 8 minutes from the time you enter, you will reach the real Catacombs, which is an underground cemetery. Perhaps you have not seen such a collection of the human skeleton before. Here, there are countless skulls perfectly arranged to form a continuous wall of skeleton pieces. Things can quickly become shuddering upon the realization that the skeletons used to be living people. Phew.

It could, in fact, feel like a cross over between reality and a scene from Pirates of the Caribbean. And if you feel no snatch of fear, you can dare to take pictures of yourself and the bones. The questions remain, though, who are these people from, and how did they get here? We shall discuss that shortly.

Where the Bones Come From

Sometime in the 18th-century in Paris, there was an overflow of corpses. A place, in particular, the Cemetery of the Holy Innocents located in the city center, has many dead bodies. And since the Middle Ages, the corpses of most Parisians were buried in this place, which explains the mass over-crowding here.

When the French Revolution occurred, the constant cramming of dead bodies in Paris became a statewide concern even in other cemeteries. It became a matter of public health, so the bodies found a permanent home.

The city’s neglected underground quarries were forgotten until the authorities turned them into an ossuary in 1786. The Cemetery of the Holy Innocents was the premiere cemetery to be emptied to have all the bones transferred to the Catacombs.

The quarries were reinforced to make them safe. Subsequently, the countless bones were delicately stacked from various cemeteries around the city, which were demolished or closed as soon as they were empty.

The Arrangement of Bones

As you walk through the maze of tunnels, you will see that the bones are carefully arranged. Most commonly, you will observe that the walls are made of shin bones topped with the skulls of human beings. At the back of these well-arranged barriers, other bones are stacked more dangerously.

You will even find some spots where the bones are organized more aesthetically, in the shape of crosses and hearts. You will marvel at how stunning the bones could be. If you take a guide along, the poems and psalms carved into the signs will be explained better.

The Catacombs is a massive maze of tunnels, and no one knows how many chambers or tunnels are there. Before the bodies were moved to the site, the quarries were expanded over the city center. Much of the limestone that built Paris was gotten from these mines. However, as Paris grew, it expanded to where the quarries were, hence, the abandonment of the quarries.

In the course of the Second World War, the French resistance used the tunnels, and rave parties bloomed there in the 1990s. Victor Hugo, Les Misérables author, used his knowledge of the tunnels in his book. Communards killed a group of monarchists in one of the tunnel system’s chambers in 1871. Despite the intriguing and dark history, a section of the tunnel maze is open to the public, and that is the popular Catacombs of Paris.

Right from the day they were completed, the Catacombs have been an object of sheer curiosity, even for royals. It will be recalled that in 1787, Lord of d’Artois (future King Charles X) went there in the company of ladies from the court. Emperor of Austria, Francois the 1st, also visited and explored the Catacombs. And in 1860, Napoleon III visited too with his son.

The walls are covered in graffiti that dates back to the 18th-century. It was towards the end of the 18th-century that the place became a tourist attraction and have been open to the public regularly since 1867.

Facts about the Catacombs of Paris

How to Visit the Catacombs of Paris

To get there, you can take the subway and the RER to Denfert-Rochereau. Alternatively, you can use Bus 38 and 68. The museum is open from Tuesday to Sunday from 10 am to 8:30 pm.

The queue can be frustratingly long, so reserve a spot online or by getting there early. Tickets come with discounts. In addition, there are audio guides available in various languages.

There are two types of tickets: pre-purchased and stand-by tickets. Pre-purchased tickets afford you the chance to skip the queue and an audio guide for adults. However, the tickets are expensive. Children between 4 and 18 cost around 5 euros and adults over 18 costs around 29 euros.

Why You Should Visit the Catacombs of Paris – Summary

The Catacombs of Paris are quiet, damp, dark, and a bit downright depressing yet incredibly interesting. The place should rank high among your list of the most unusual places to visit in Paris. To know the city better, a visit there will afford you that and the rare chance to see the beauty in skeletal chaos.