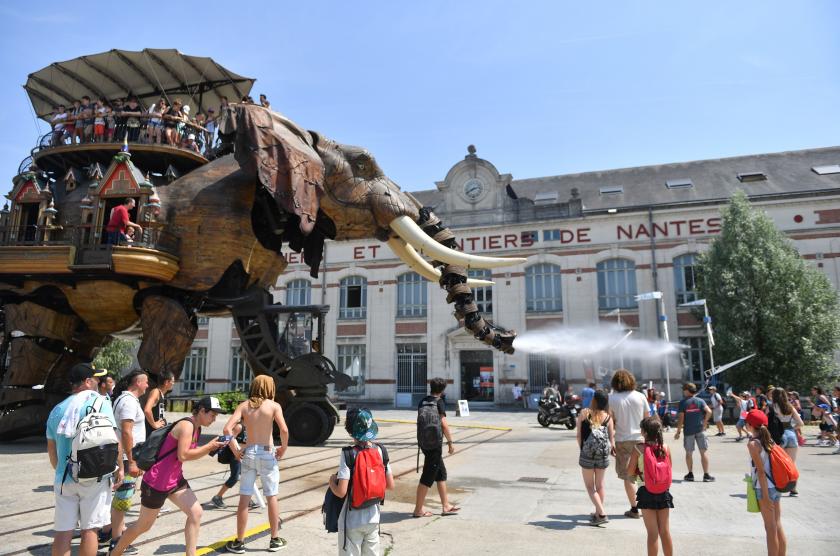 Given its prominent water features and beauty, Nantes is regarded as the jewel of western France. The River Loire passes through the city center, and the River Erdre- a tributary to the Loire. Which also courses through Nantes. River Loire is France’s longest river as it rises in the Massif Central and flows north and west to the Atlantic Ocean. Undoubtedly, it is one of the country’s stunning water bodies. That is why you will often find scenes of romantic dinner cruises.

Recognized by Time Magazine as the most livable city in 2004, Nantes is the capital of the Pays de la Loire region of northwestern France. The city has a rich history, like most French cities. Nantes used to be Brittany’s capital until the Second World War when boundaries were redrawn. Notwithstanding, the city retains much of Brittany’s identity. The city is a pleasant destination for tourists from all over the world. Nantes is the sixth-largest French city and is considered a great place to live. The city especially lures young professionals, who are arts and culture buffs, and adventure-seeking tourists.

Here Are Some Things to Know and Do in the City of Nantes:

Whether on a train or plane, getting to Nantes is easy. High-speed TGV line from Paris Montparnasse train station and many other train lines serve the city. The area is also served by the Nantes Atlantique Airport, and you can fly there from Paris, London, other French cities and the UK. It takes about thirty minutes for a shuttle that connects the airport with the city center and Sud railways station. And you can equally employ the services of cabs and buses to take you from the airport to the city center.

There are many exciting restaurants, bars, cafes, and bistros in Nantes. The area’s vineyards produce wines like Muscadet and Gros Plant which are both superb with seafood and fish. You might want to try the native Muscadet with oysters. Another Nantes peculiarity is a cow’s milk cheese called Fromage du cure nantais. Developed by a priest near the city, the dish pairs well with a glass of Muscadet. Close to the Passage Pommerage and the Place Royale is the Maison des Vins de Loire, the Loire Valley Wine Center, situated in the previous “wine port” of the city. There you can buy the local wines of Loire Valley.

Seafood dishes are not a rarity in Nantes. Pike, perch, and eels from the sea can be bought here too. And you might want to try a gateau nantais, a cake that is a mixture of Antilles rum, sugar, almonds, and butter.

Château des Ducs de Bretagne is a fortress with a residential palace. Markedly historical, the fortified palace is in the eastern part of the old town. Its sizable walls and towers are distinct as they surround the refined Grand Logis where the dukes once lived. Château des Ducs de Bretagne was built in the 13th century and occupied for 300 years by the Dukes until becoming a French royal residence in the 16th century.

As you will see, the courtyard and bulwarks are free to enter, after you pay to visit the Nantes History. Here you get to see the different stages in the city’s evolution; from the dark days of the slave trade to its time as a prosperous industrial port. Douves du Château, an incredible spot for an afternoon break in summer, is a green space just by the deep moat. The entrance to Château des Ducs de Bretagne is totally free and has a beautiful view of the city center.

One of Nantes’ busiest centers, the interesting Passage Pommeraye is between two streets with different elevations; the rue Santeuil and rue de la Fosse. You will find a long strip of shops and cafes dealing with various items. It is noteworthy that this shopping arcade from 1843 is not merely a sophisticated place for buying and selling, but a brilliant piece of architecture.

The passage was built on a steep slope. And is adapted to the nine-meter height difference with an ingenious intermediate floor between the street levels. It is close to two centuries, and Passage Pommeraye still retains its splendor. The passage’s neo-renaissance sculpture and stonework, iron and glass roofs that fill the galleries with light are what attracts visitors to this part of the city.

Check Out the Memorial to the Abolition of Slavery

The city of Nantes owes much of its prosperity to the ignominious slave trade, which accounted for about 43% of the total trade in Europe. For decades, the city kept its involvement to itself. However, the story is well narrated. First, at the Castle of the Dukes of Brittany, and then at this underground Memorial. That is both stunning and provoking at the same time.

You can commence your journey at the Castle where a road takes you straight to the Memorial. As you proceed, about 11 information placards tell you about the places you pass that have direct links to the slave-trading history of the city. Places like a slave ship builder’s house and other spots are what you will see. The road is 1.5km long and will take you close to an hour to complete.

The Memorial is a massive one. The Universal Declaration of Human Rights and the word ‘Freedom’ in 50 languages, a map and timeline, texts, songs, literary works, and personal accounts are carved both in the underground Memorial and on a large glass panel that spans across the quayside. As more information, the Memorial is open mid-September to mid-May and opens from 9 am to 6 pm and opened from 9 am to 8 pm in mid-May to mid-September.

With a shuttle boat, you can find your way from the Gare Maritime on the North bank of the famous Loire past the Isle de Nantes to Trentemoult. It would be as though you have stepped back I time to the 19th century. Vivid and bright, this small village is filled with colorful houses and narrow streets. The homes have unique designs, set over three floors, with the lowest used only for storage as the Loire river would burst its banks often.

A place that was once a fishing village is now occupied by artists. They keep the atmosphere and the feel of a country village; even though it’s just minutes from the city. You can walk away from the harbor to the streets, where more prominent building housed ship’s captains. At the quayside are stylish vintage shops, restaurants, and crêperies with terraces close to the river.

The Loire runs from Nantes down the large estuary to the sea at St-Nazaire. Down both sides of the river, you will find some fascinating sculpture, large-scale installations, and architectural projects made by a collection of international artists. There are 28 erected along the 37.5 mile way.

These pieces span from some realistic bears in tress to an extraordinary spine of a sea snake at the western end. From a giant meter rule snaking around a building in Nantes to the house striking a leaning position in the Loire, which if you did not see coming, strikes as a surprise.

You can also take a journey to the sea past the sculpture, either by car or take an estuary river cruise from Nantes to St-Nazaire. You should also know that from April to September, there is usually a 3-hour tour. Another alternative for you to explore with includes taking more extended tours with a meal on board.

The city is on the major bicycle route in the Pays de la Loire where 800km of trails and back roads. These roads are designated for cyclists to take visitors and locals along the assertive river Loire. As such, there are three suggested itineraries:

A fine name for a nice place. This square is at the center of Bouffay, the oldest district in the city. Treading the pedestrian street, you will find half-timbered houses that date back to the 15th-century side by side with restaurants, crêperies, and some of Nantes’ active nightspots.

If you are looking to having a decent taste of French nightlife, a visit to Bouffay will sufficiently give you that. Also, the square is from the 18th century, but there are more evocative vestiges of a far past. Part of these is on the corner of rue des Échevins where a gothic fireplace protrudes out of the wall. It dates back to the 15th century.

If you are a fan of science fiction or the writer, this might be a chance to pay homage to the icon. Jules Verne was a French writer who is considered the father of science fiction. Verne was born in Nantes in 188 and spent most of his first 20 years around the city.

This museum, dedicated to the Around the World in Eighty Days writer, is a large mansion from 1878. Though it has no direct connection to Verne, it is close to where the writer’s parents lived in Bas-Chantenay. The museum’s gallery is stuffed with games, books, manuscripts, portraits, and documents belonging to the writer passed on to the museum by his heirs.

This is a perfect destination for tourists. As a part of a new city district built in the 18th century, Cours Cambronne is a marvelous square between two 180 meter-long terraces of classical buildings. You will also find delicately cultivated garden arranged with close-cropped trees.

Explore the regal central avenue to the famed statue of Pierre Cambronne, who was a military general born in Nantes. In 1815, he got injured in the Battle of Waterloo. Listed in the French historic monuments inventory are the sixteen of the fabulous plastered mansions on the square.

Step on the Isle of Nantes

The isle if Nantes is wedged in the middle of the Loire river, dividing the city. It has been developed into a new center of the town. This area which used to be Nante’s industrial hub is a perfect example of urban transformation. Presently, many of the old buildings have undergone renovation while new ones have been sublimely built.

The extremely pleasing Machines de L’île and the Creation Quarter, housing schools of architecture, graphic arts, and design can be found on the isle. Have a swell time navigating some of the estuary art here, like The Rings by Daniel Buren and Patrick Bouchain which traverses along the sidewalk and is usually lit up at night. In addition, the Banana Warehouse hosts many restaurants and bars. It is an exciting side as there is good food, a book store, grocery store and football tables on the terrace.

Do you have any other ideas that we should add in this Nantes Travel Blog? Leave your comments below. 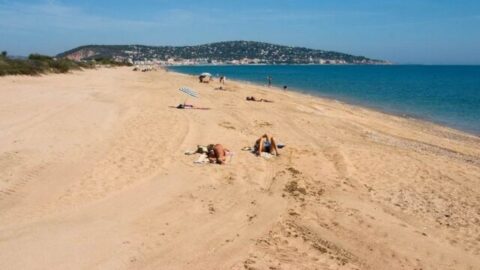 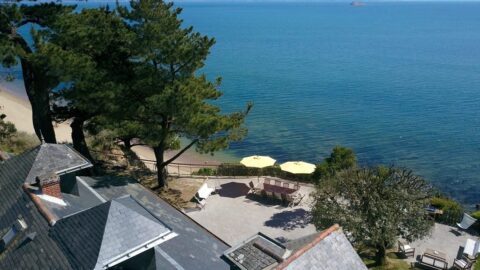 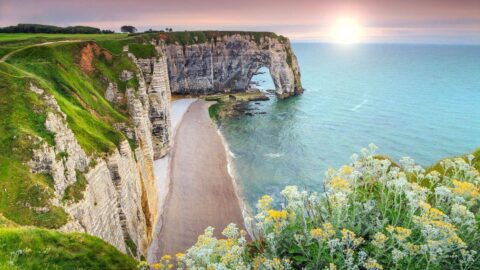