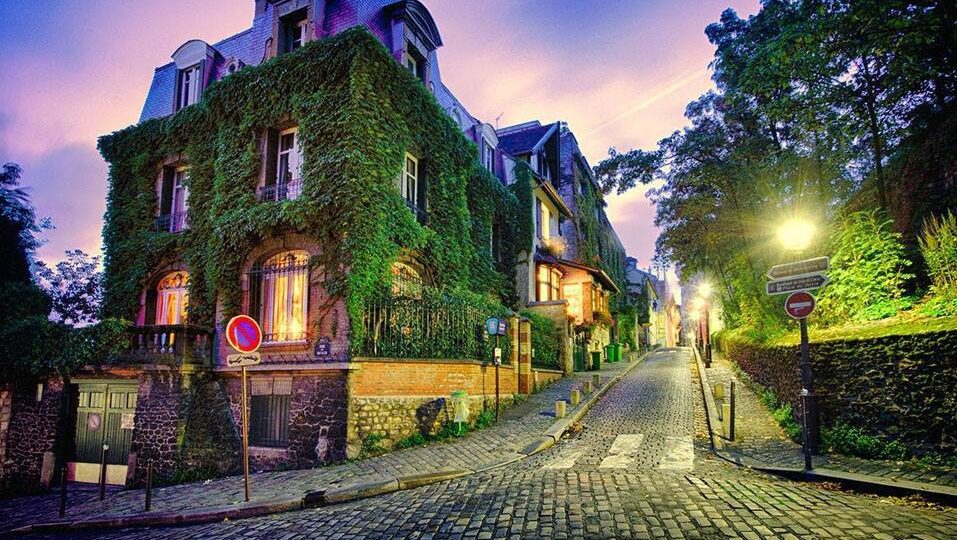 Montmartre- the artsy part of the French capital- is both impressive and nostalgic. The area is accessible throughout Paris, and its cobblestone streets come to live with artists painting beautiful views and gifted street artists doing their thing. That is not entirely all about this breathtaking area, however.

Since the Belle Epoque, Montmartre has caught the attention of Bohemian artists, and it continues to impress tourists today. Sitting on a hilltop, the area looks totally different from the rest of Paris, even though it is located in the 18th district (Abbesses Métro station). Montmartre has a distinct atmosphere. Joie de vivre is everywhere at quaint sidewalk cafes, carousels, and unique street performances.

Visitors come in droves to the ravishing Sacre-Coeur Basilica at the peak of ‘Mont des Martyrs’- the resting place of Saint-Denis. The Sacre-Coeur may have a colorless atmosphere inside the church, but it is lively on the outside. From the Basilica’s terrace, tourists can savor the view, and it is a great place to pose for the camera; others take on a walk while enjoying the tunes from the street musicians.

A few steps away are the open-air Artist Market of Place du Tertre and many museums showcasing works by Picasso, Dali, Renoir, and Toulouse Lautrec, who made the area an artists’ town. It is worth spending time to playfully stroll the stone-paved lanes and discover old sanctuaries, obscured squares, small bakeries, and inspirational artist workrooms. Montmartre is known for many things beyond the arts, and there are many things that tourists could spend days exploring. Explore the district’s historical past and unwrap its present-day character in my guide to the famous things about Montmartre.

Here Are A Few Things That Montmartre Is Famous For

The Sacré-Coeur is one of Paris’ major landmarks, standing above the city from high on the Butte Montmartre. As a symbol of hope, the church was established after the Franco-Prussian War. The Byzantine and Romanesque-style Basilica has many domes (in the semblance of decorative layer cake), hence the nickname ‘Wedding Cake’. When you step in, the impressive Christ of the Sacred Heart ceiling mosaic greets worshippers. The interior is well lit with lots of candles that give it a nimbus of spirituality.

There is also a Grand Organ (recognized as a Historical Monument) in the Basilica. It is played on Fridays for Mass and Sundays for Mass and vespers. There is an organ concert held on Christmas Eve before the Midnight Mass. Apart from these events, the Basilica is set aside for silent prayer.

One of the major attractions of this popular destination is the vista from the Basilica’s Dome. In clear weather, people can see the whole Paris cityscape comprising of Centre Pompidou, Notre-Dame, and Opera House. Outside, atop the Basilica on the left is the entry point to the Dome that is made up of 300 steps (no lift).

There is also the Sacré-Coeur Esplanade (at the Parvis de la Basilique) that has majestic views. The esplanade is usually filled with tourists and locals, and at some times, street musicians delight the crowds. Under the esplanade are the Place Louise-Michel’s leafy gardens, cut across by a staircase that leads to the sanctuary’s entrance. Where the staircase starts (at Butte Montmartre’s base) is the Place Saint-Pierre, which is a splendid spot for families given its gorgeous old-fashioned carrousel.

To reach the Sacré-Coeur, visitors who do not mind going uphill can trek from Place du Tertre to 35 Rue du Chevalier-de-la-Barre (the entrance behind the Basilica). Here is another option, from the Place Saint Pierre, it is sightly but steep 20-minute walk up to 222 steps (through the lush Place Louise-Michel) or a less than two-minute funicular ride that starts close to the Place Suzanne Valadon, a short stroll from the Place Saint-Pierre. Basilique du Sacré-Coeur is located at 35 Rue du Chevalier-de-la-Barre, 75018 Paris.

One of the great places to visit to feel the inventive spirit of Montmartre, this beautiful stone-paved square is an alfresco art gallery where local artists make and sell their works. Tourists can find different types of portraitists, painters, and caricaturists, even though most of the work is made to be tourist souvenirs. The square is marked with interesting and adorable 1700s buildings that now serve as cafes and restaurants with alfresco seating, allowing visitors to absorb the scene.

The Place du Tertre hardly loses its allure even when filled with tourists. It stands in the shadow of the Sacré-Coeur and blocked by an old tree to give the feel of being in a provincial square. Prior to the integration of Montmartre to the Paris, Place du Tertre used to be the major square of the medieval village.

The best way to discover the hidden gems of Montmartre is to visit its own museum. It perches on the top of the hill of Montmartre, and about 14 popular individuals have called it their home- from Valadon and Renoir to Poulbot and Dufy. Enter into the glistening history of this bohemian spot through works by Utrillo, Willette, and Toulouse-Lautrec, and treat yourself to an originally rustic atmosphere. The museum is located at 12 Rue Cortot, Paris.

This gallery offers an interesting journey through the works of Dalí, unfurling a previously obscure depth to his projects that charm visitors like it is the first time. For those who have seen his tender watch sketches- which puddle and melt- they might not be conversant with this collection; comprising of theatrical but reflectively crafted objects, sculptures, furniture, and engravings.

Surrealism enthusiasts will also find this place delightful as it is the biggest permanent exhibition in honor of Dalí in Paris. After leaving the exhibition, you can proceed to take pictures at the photo booth where you can make funny facial expressions in truly Dalí style. The gallery is located at 11 Rue Poulbot, Paris, Ile-de-France, 75018.

For soemthing unusual, visit the Montmartre Cemetery. While such a visit might seem morbid, it can be filled with cultural discovery and inspiration. The cemetery boasts of being the resting place of literary luminaries like Émile Zola- who wrote the popular French novel Thérèse Raquin (1868), Alexandre Dumas, and Edgar Degas. Many people also visit the Père Lachaise cemetery to pay homage to personalities like Jacques Brel and Jim Morrison. The cemetery is located at 20 Avenue Rachel, Paris, Ile-de-France, 75018.

Montmartre is also popular for its macaron making class that adds a star to its culinary prestige. Mesny is an original French home chef whose macaron class is quite famous, with aspiring chefs and enthusiasts always visiting. The class provides a distinct hands-on chance to learn the art of making one of the tastiest French desserts, whether as a personal specialty or as a souvenir. It is situated close to Abbesses Métro station, as featured in the popular movie Amélie (Le Fabuleux Destin d’Amélie Poulain) (2001).

A visit to this museum is the ideal decision in the City of Love. Dutch painter Ary Scheffer in the early 1830s converted his home, Hotel Scheffer-Renan, into a lively salon. A range of artists like Frédéric Chopin, Franz Liszt, and Eugène Delacroix frequented the place. This explains why the museum’s walls are embellished with their art.

In addition to the permanent works on show, Musée de la Vie Romantique, the museum holds a host of temporary exhibitions, book readings, live music, and activities for children. It is located at 16 Rue Chaptal, Paris, Ile-de-France, 75009.

In 2000, mural artist Claire Kito and calligraphist Frédéric Baron created the ‘I Love You Wall’, a love-themed art project. The love runs over a massive plane of 612 tiles of ornamented lava rock, on which ‘I Love You’ is written in 250 languages 311 times. It is a must-visit for the romantics visiting the city. It is also a stunning background for a selfie.

The sprinkling of red on the mural signifies a broken heart, representing the human race that has been separated and that the work now attempts to bind. This pulsating artistic monument is situated on the square at Place des Abbesses and is open to the public.

What is Montmartre Famous For – Summary

Without Montmartre, the city of Paris would not possibly be the same! The area has a distinct atmosphere that makes it different from the rest of the French capital as soon as you visit. And it is hardly surprising that it is one of the most popular and adorable areas of the city. Montmartre is the quintessential art hub tourists should visit on their Paris trip.