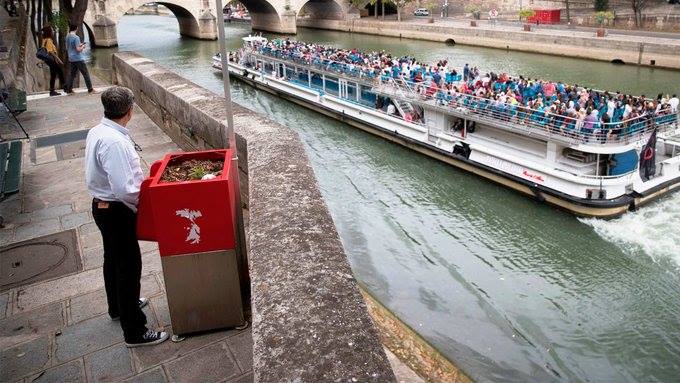 Many people that are visiting Paris and walking the streets of the French capital expect many things. Unfortunately, the smell of pee shouldn’t be one of them. So, Why Does Paris Smell Like Pee after all? Let’s take a trip down memory lane before directing the problem.

In the nineteenth century in Paris, public urinals were the first places where homosexuals were feeling free to express themselves. Also, they become a space where resistance forces exchanged secret messages undetected by the enemy.

The Parisian society called these boxes “pissers” or “vespasiennes” at that time and were placed on the sidewalks to meet the natural needs of men. They existed in the city of Paris from 1834 until the penultimate decade of the twentieth century, specifically until 1984.

They responded to the problem of hygiene in the city. Also, they were serving a social need, since they were places of relationship encounters that were impossible or prohibitive in other places. Full generations of homosexuals became independent there. There were almost 2,000 vespasiennes throughout Paris.

The first urinals were placed in the parks. However, because they were so popular, they were quickly installed in various places. The more hidden the place was the vespasiennes placed, the more things happened inside.

Over the years, these urinals were also used as places to install state and private advertisements. On some occasions, the government carried out campaigns to prevent venereal diseases and installed fences in all the vespasiennes.

They were also strategic places in politics. The resistance against the Nazi occupation used the urinals to transmit messages. They even kept weapons in the vespasiennes that were later recovered by other fellow soldiers.

In 1980 a change of direction in the rules of hygiene in Paris made these urinals disappear. However, the culture of urinating in the street remained in the subconscious of the Parisian. So did the smell of pee in the streets of Paris.

The fact the French law says that public urination is a crime has not stopped the average citizen. Almost all places in Paris smell like urine, avenues, alleys, squares, monuments, walkways of subway stations, among others. Wherever you are, the smell of urine will chase you.

Many factors in the city have not allowed the elimination of the urine problem in Paris. In the first place, the French like having dogs. When they take them out for a walk, they make their “business” in light poles and trees. Not to mention that you can find dog poop on any sidewalk, this increases the bad smell of the city.

Many families have a dog as a pet in Paris. There are even many pet-friendly hotels in the city, which accept tourists and guests with their dogs as pets.

Second, there is a very high deficiency of public toilets in the city. Unlike other cities in the United States, Australia, New Zealand, or Great Britain, where the location of a public restroom is indicated anywhere, in Paris, there are no such signs; This makes Parisians urinate when and where they need it.

Thirdly, Paris is one of the European cities where there are many homeless people. These people usually sleep in the facilities of the city’s subway stations. Having the need to urinate, they do not seek a toilet; they simply pee wherever they want.

And fourth, Paris is a city that has many places for fun; people find bars and discos throughout the city. This makes many young people who frequent these places, when getting drunk, have the need to urinate in greater frequency. They pee where they want; they don’t mind breaking the law since their drunkenness doesn’t make them realize what they are doing.

It is good to know that police imposes a fine of 68 euros to the people who catch urinating in the streets of Paris; they have to pay it to the city. There are many men fined for this reason.

Currently, the French government has established an alliance with a renowned French design company to develop the Uritrottoir as a solution for public urination in Paris. It is a rectangular design decorated at the top with a charming flower arrangement; it has the advantage that it not only makes urinating in the street more civilized but also ecological.

The goal is to install this urinal on sidewalks in places where historically have been receiving abundant urine.

This container has a dry straw, sawdust, and wood chips with a high carbon content that reduces the smell of urine. Once it is full, between 300 and 600 urine deposits, a sensor installed in the container gives an alert signal to a person who has the role of emptying the Uritrottoir. They will be taking the sawdust and urine mixture to a place where it is converted to compost.

This compost is transformed into fertilizer for flowers; they do not use it in crops for human consumption. At present, two models are being demonstrated at the Gare de Lyon train station in Paris and in two other cities in France. The company believes that people will use it quite frequently.

To eliminate the strong smell of pee in the city, the Paris government has installed approximately 400 public toilets since 2006 that they call Sanisettes, which can be self-cleaning. Additionally, they hired workers who are responsible for disinfecting and deodorizing monuments, squares, and sidewalk walls per month.

But despite the efforts they are making, unfortunately, the urine leaks to the ground, and the smell remains, especially in the summer, when the sun squeezes hard.

The issue of urine in the street is still on the table today. Feminist organizations are campaigning strongly against the actions that the Paris government is taking. This is because their solution is focused on men, they are not considering the physiological needs of women.

The Paris government is aware of what these feminist groups are proposing. However, the say it is much more complex to offer a solution that serves women, given their status.

Since last summer, the Paris government is providing to locals and visitors a convenient map; it directs the user quickly in the places where you can get a public toilet. They even developed advertising campaigns and large street signs that indicate where they can get public toilets. The main objective is to stop people from peeing in the streets.

According to the website of the city of Paris, they offer a total of 750 public toilets. Still, that has not made men stop peeing on the street and therefore allows the smell of pee to remain.

parisThings I Hate About Paris