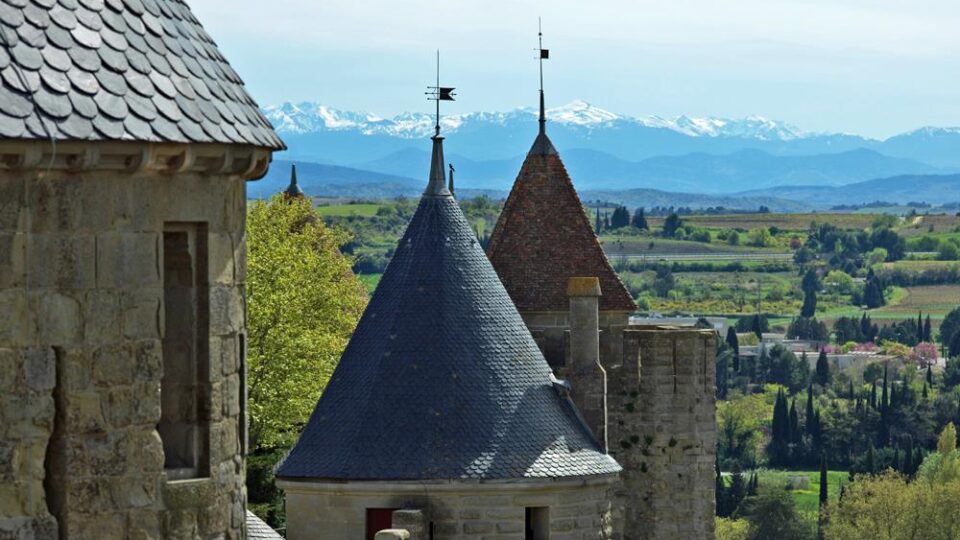 Carcassonne amazes visitors with the scenery of a fairytale. From afar of, the set of crenelated old defense walls and turreted towers make a fine impression. Also known as Cité, this massive well-kept medieval fortified city provides a fantastic tourist experience. Standing at a height of 148m, the hilltop town is in a location that proved strategic in the Middle Ages.

The town is oval in plan, encircled by a double circuit of compact protective walls with 54 towers. Dating back to the Visigoth era, the fortifications were reinforced in 1250 by King Louis IX and in 1280 by Philip the Bold. The town has its own distinct history and boasts of offerings that are absolutely deserving of exploring and enjoying.

>>Also Read: Places You Should Visit in France

Here Are A Few Reasons Carcassonne is Worth Visiting

Within the town’s citadel are Disney-ish streets of winding alleys and passageways. The stone buildings do lack symmetry, and while some are clad with ivy, others are with exposed timbers. It will be difficult not to move around with your camera frequently on your face. The perfect time to visit is early, just before other tourists come in their droves and lunchtime. An overwhelming majority of crêperies and restaurants tend to focus on day-trippers. This network of streets at its brightest when sparingly populated.

Either from below or above, inside the walls or on the ramparts, Carcassonne’s dual fortification line is a beauty. The unbreachable walls and 53 towers are worthy of the attention they get as they go on for 3m around the quaint upper city. Visitors can either enter the Château Comtal with an audio-guide and take a 2-hour tour to spend two exciting and informative hours discovering how the walls were raised in the 2400s. Also, you will learn how they were restored in the 19th-century by Viollet-le-Duc. Visitors can complete the entire walk along the ramparts. Between the walls are even shows for families to watch in the summertime.

Basilica of Saints Nazarius and Celsus

Built over many hundred years from the 800s to the 14th-century, what makes this sanctuary unique is the way gothic and Romanesque designs blend easily. The ambiance of harmony is not hard to miss in the church’s interior that escaped Viollet-Duc’s injection of brilliance and features Romanesque stonework, sculpture, and stained glass windows on the flanks. The long central stained glass window in the choir is one of northern France’s oldest and was completed in 1280.

Referred to as the Bastide de Saint-Louis, this part of Carcassonne was built in the 1200s outside the walls on the request of Louis IX (known as Saint Louis). There is a refreshing vibe to La Cité that owes to the constant grid-street-plan, the regular French amenities, high street stalls, and a near-absolute absence of visitors. To begin with, Place Carnot is a great place to start your short trip through this place; restaurant tables are extending to the square, and in the center is Fountain of Neptune that has been there since 1770.

Less popular than the Basilica, the town’s present cathedral used to be a regular parish church in the Lower City until the Episcopal was changed at the beginning of the 1800s. But it truly deserves the name, as it was built in the 1200s and is an impressive work of southern gothic architecture, with a stunning rose window and an octagonal bell-tower. It was destroyed in the 100 Years’ War and was rebuilt with ramparts; you can also tell from the loopholes on the tower. In the restoration works in the 19th-century, Viollet-le-Duc was involved. It was his maiden project in the town of Carcassonne before he went on to the fortifications.

20 minutes by bus or car from Carcassonne is a lake made by a dam dating from 1988. There are 40 hectares of pine woodland and water, 3 small beaches, a grassy area, and different things designed for children to do in the summertime. Visitors can hire pedalos and play mini-golf while the children have an expansive playground to playing around. Motorized crafts are not allowed on the waters, so there is the chance to take the calm strolls in the hills and have family picnics on the benches under the pines.

The town’s fine art museum was built in 1836. Nearly 200 years and several donations later, it offers visitors an illuminating journey through French art from the 17th-century to the 20th-century. From the 17th-century, there is one of Musée des Beaux-Arts’s eight galleries that is devoted to Dutch and Flemish art. There you will see works from artists likes Jan van Goyen, Brueghel the Elder, Jacob Jordaens, Mattia Preti, and Gustave Courbet. On display in room five is the 1800s French ceramics and the telescope Napoleon after leaving Elba in 1815.

The Aude department’s hills are garnished with gothic ruins of medieval castles that the noblemen loyal to the Cathar sect owned. The sect was crushed by the French Catholics in the Albigensian Crusade, and many of these sanctuaries turned to ruins. Cabaret, Quertinheux, Régine, and Surdespine are the four chateaus in Lastours that were sacked in the crusade before they were converted to fortresses.

While they are all different structures, they make up the same complex with arcades, courtyards, spiral staircases, and murder holes, towers with loopholes as well as the remains of a church. The location is great, high on a craggy foreland in the Black Mountains. And the many small flourishes and surprises add to a satisfying hour or two of adventure.

Pierre-Paul Riquet’s brilliant piece, the Canal du Midi, was dug in the 1600s and helped link the Mediterranean and Atlantic coasts. It leads through the town just north of the Lower Town. The leg between this place and Sète is regarded as the most scenic of all. While you do not need to go that far, you can still go east outside Carcassonne along the haul trail for a few miles, because the plane trees connect over the water to make a green tunnel. You can find guided boat tours with Carcassonne Cruises, highlighting the historic bridges and locks.

>>Also Read: Barge Cruises in France: Why You Should Take One

Behind the Black Mountains are the gorgeous village of Caunes-Minervois juts 20 minutes north of Carcassonne. The area is breathtakingly scenic, with rustic stone walls, orchards, Minervois vineyards, and olive groves. Built around an abbey established in the 700s, this medieval village has historic quarries that give the pink marble for the Trianon Palace and the Louvre. Also, the abbey is full of this stone: one of the building’s most adorned parts is the apse that is from the 1000s and highlights the unassuming Romanesque style.

For non-vegetarians who especially love game and poultry, the Carcassonne diet will fit you just fine. Goose and duck confit are well-known treats here as well as Spanish-styled cured ham. However, Cassoulet is southwestern France’s fondest dish, a casserole with sausage, white haricot, and goose or a duck confit. Meanwhile, Carcassonne has its own cassoulet variant, with the addition of partridge meat to the stew. Food buffs could try Languedoc-style snails, in which they are cooked in their shells with onions, parsley, tomato, and ham.

One of the major reasons you should Carcassonne is that it is the center of the largest wine region in the world. East is Minervois, making mostly red wine from a blend of Mediterranean, Bordeaux, and Rhone grapes. And just south of Carcassonne is the highland of Limoux region, popular as the place where wine was first made in the 16th-century. Crémant de Limoux Blanquette de Limoux, Blanquette méthode ancestrale are sparkling whites to look forward to discovering. Similar to champagne, the bubbles are made with secondary fermentation in the bottle, but with a unique flavor of fresh, apple notes.

Museum of the Inquisition

To be taken lightly, you can visit this museum to while away time, and the kids will somewhat marvel at the exhibits even though it was not made for them. The museum showcase the eye-catching creative methods and tools deployed for torture in the medieval period up to the Revolution. There is a focus on the Catholic Inquisition of the Cathars in the 1200s. Keep in mind that a good number of the pieces here are reproductions.

Is Carcassonne Worth Visiting? – Summary

Perhaps the best time to visit Carcassonne is July, and bear in mind that the town is one of France’s best destinations to see the Bastille Day fireworks. Strategically situated between the Mediterranean Sea and Toulouse and fortified by the Romans, this town is Europe’s largest citadel. For more on what is worth doing and seeing in Carcassonne, visit yourself because the internet barely captures the magic of this Languedoc-Roussillon gem.