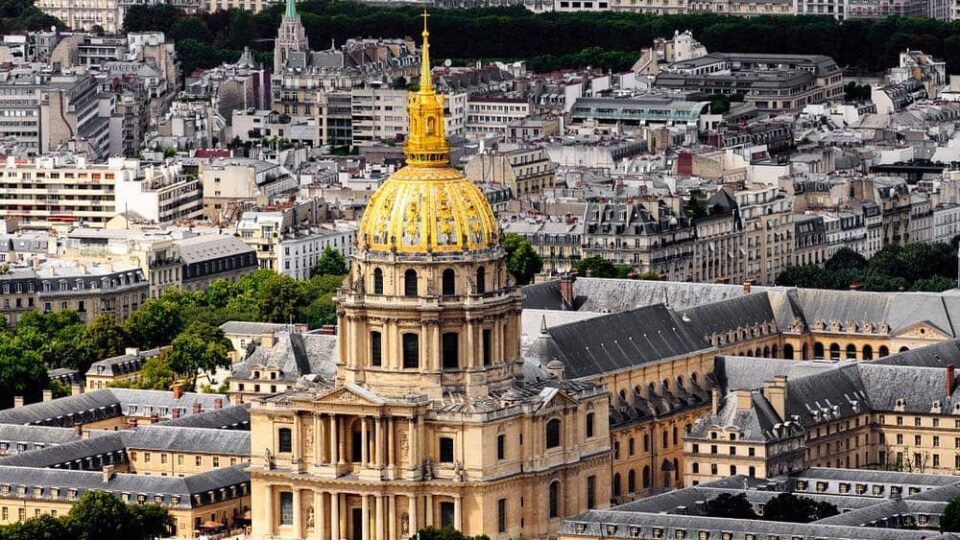 Les Invalides is among the most attractive spots in Paris that every tourist is worth visiting. Interestingly, you might want to go there more than once anytime you are in the French capital. With monuments, museums, a retirement home for servicemen, a hospital for war veterans, and a mausoleum, Les Invalides is the city’s rambling collection of courtyards and buildings set aside for all things military.

When you visit the 7th district of Paris, Les Invalides is a must-visit, either before or after a trip to the elegant Eiffel Tower, or whenever you decide to learn more about the fascinating history of France’s military. The highlight that makes Les Invalides Worth it is the tomb of General Napoleon Bonaparte that is situated under the unique imposing golden Dome. Also in the complex is the military museum of France, Musée de l’Armée. You will see a museum that is dedicated to maps and a burial site for fallen heroes in the war too.

>>Also Read: Is the Eiffel Tower Worth Visiting?

Reasons Why Les Invalides Is Worth Visiting

The jewels of the French artillery catalog and sixty bronze cannons are broadly displayed in the main courtyard. Visitors can discover two centuries of history and learn how the equipment was made. Sometimes in the 17th-century, the original French classical cannons were made and deployed in sieges and wars of Louis XIV. Until 1764, they were largely unchanged.

Also known as l’église du dome, the royal Dome and chapel were built in the late 17th-century and completed by architect Francois Mansart in 1706. This is one of the most prestigious domes in the entire country. From the façade, adore the Corinthian and Doric columns, and statues of Charlemagne. Under the domes is the wall painting of St. Louis giving his sword to Christ.

Twenty years after his death, the general’s remains were returned to St Helena to Paris. It will take two decades again before Napoleon was placed in the crypt at Les Invalides’ chapel. Lying next to the general are Jerome and Joseph, his brothers, and Napoleon II- his son. His son, who was fondly called ‘Franz’ died of influenza in Vienna in 1832 at 21. Adolph Hitler ordered that Franz’s remains be returned to Les Invalides. Every part of his body was returned except his intestines and heart, which remained in Vienna.

Observe the twelve Victory statues around the general’s grave. The statues were made by Jean-Jacques Pradier, the Swiss sculptor, and represent the general’s military campaigns. Inscribed in the marble floor are eight of Napoleon’s victories, while ten bas-reliefs greet his civilian accomplishments.

If your knowledge of the general’s exploits seems rusty, his achievements feature a civil code, large-scale works, the Legion of Honor, court of audit, Council of State, University of France, administrative centralization, pacification of the nation, and Concordat (an agreement between the secular and the Vatican governments).

Soak yourself in Charles de Gaulle’s history with several audiovisual displays- sources, news, photographs, posters, along with interviews and films. Visitors can check out his accomplishments from the leader of Free France (1940-1944) to the Provisional Government of the French Republic (1944-1946), to President of France (1958-1969).

A Brief History of Les Invalides

In 1670 Louis XIV ordered the building of a retirement home for soldiers who have served the country. The official name for the home was Hôpital des Invalides. It is difficult to imagine now, but prior to the time, the old, sick, or differently-abled soldiers had no care home. When the construction of Les Invalides was completed, the complex had a glit-domed chapel, fifteen courtyards, and enough for close to 4,000 occupants.

On July 14, 1789, an incensed group of rioters stormed Les Invalides and seized control of the ammunition kept in the cellars. They went away with muskets and cannons, went to streets, and took over the Bastille.

Highlights at the Musée de l’Armée

Historic items- The museum is filled with items relating to the military history of France from the Middle Ages to the 1900s, including historical uniforms, suits of armor, paintings, swords, sabers, sculptures, and photographs.

Musée de l’Armée is divided into different areas as follows- the Old Arms and Armour (8th-17th-century), Louis XIV to Napoleon III (1643 to 1870), both World Wars (1871 to 1990), Charles de Gaulle Historical Center, and the French Classical Cannons.

It has one of the most admired collections – Opened in 1905, the museum has one of the most impressive collections of art and military history in the world. Among the treasures is Napoleon on His Imperial, a painting by Jean-Auguste Ingres. In it, the general wears a dazzling purple velvet robe decorated with golden bees. He wears a golden crown on his head with Charlemagne’s scepter in his hands.

Musée des Plan-Reliefs (reliefs maps)- made up of miniature models (crafted in the time of Louis XIV and Napoleon III- of the 1600s and 1700s) protected French castles, towns, and cities. At the time, they were useful in the defensive artillery planning.

The museum’s boldest claim is its 500,000 preserved artifacts collected throughout the history of France. While it is almost impossible to thoroughly explore the museum at once, do not forget that you can always come back anytime to continue from where you left off. As a result of its impressive amount to artifacts, Musée de l’Armée was divided into several parts, as earlier stated, with each area having their distinct collections.

Its Architecture is Massive

Sighting the ornate golden Dome that links the city’s skyline is simply sublime. The chromatic concrete of the main building doubles nicely with the archways balconies that extend through the setting. It is quite the catch in terms of traditional Baroque architectural style. As you might observe, the Baroque-esque design is ubiquitous in the museum’s area.

Another important part of the museum is the Charles de Gaulle Monument that is dedicated to the Fifth Republic’s founding president. The ceilings appear to link up with the sky, and it has biblical panels of embellished artworks.

Nearby Attractions of Musée de l’Armée

The 7th district of the city is sometimes called the center of Paris. At the Left Bank is where the museum is located, and this end is filled with endless charm and many things to do and see. To lift the mood, you could proceed to a space that is rather the opposite of a war museum. The Musée d’Orsay is the second most popular museum in the city, and its collection includes several of the brightest French artists like Renoir and Monet.

If you are s sucker for shopping, Le Bon Marché is the place to be. It is located on Rue de Sevres and is the oldest department store in the entire city. Its food hall is a good place to dine and wine. Try their oysters, sushi, and pates to have a taste of what Paris is all about.

In the case that you continue your stroll down south from the museum, approaching Rue Blomet, you will see Piscine Blomet- a good public swimming property that is always helpful during the warmer months. The pool is clean, and entry is as low as 2 euros a day. Spending an entire day in a museum, especially in the hot periods of the year, calls for a satisfying dip in the area before going home.

Minimum Time You Should Spend at Les Invalides

While it is heavily dependent on your itinerary, you can get a good grasp of the Dome Church’s grandeur in about 60 minutes. But it is not a difficult walk around; therefore, you do not need to rush. The nearby Musée de Laree is a decent place to visit in the morning or afternoon. All in all, 2 to 3 hours should be enough to see Les Invalides.

Getting to Les Invalides

Advance from the north over the Alexander III Bridge. Not only will you have a magnificent view of the entire area, but there is also the chance to see one of France’s most incredible bridges. Both the gold on the bridge and the Dome’s gold was recently polished. You should also relish seeing the museum from this end. If you approach from the Avenue de Tourville, you will most likely be facing Napoleon’s tomb and the Dome Church.

Is Les Invalides Worth it? – Summary

Les Invalides houses one of the largest military art collections and history and offers a distinct overview of French history. Do not forget to check out the Dome Church, the museum’s permanent collections, and Napoleon’s tomb. Les Invalides is located in an area you should discover for its goodness and truly Parisian character. With all of the above in mind, Les Invalides is definitely worth it.