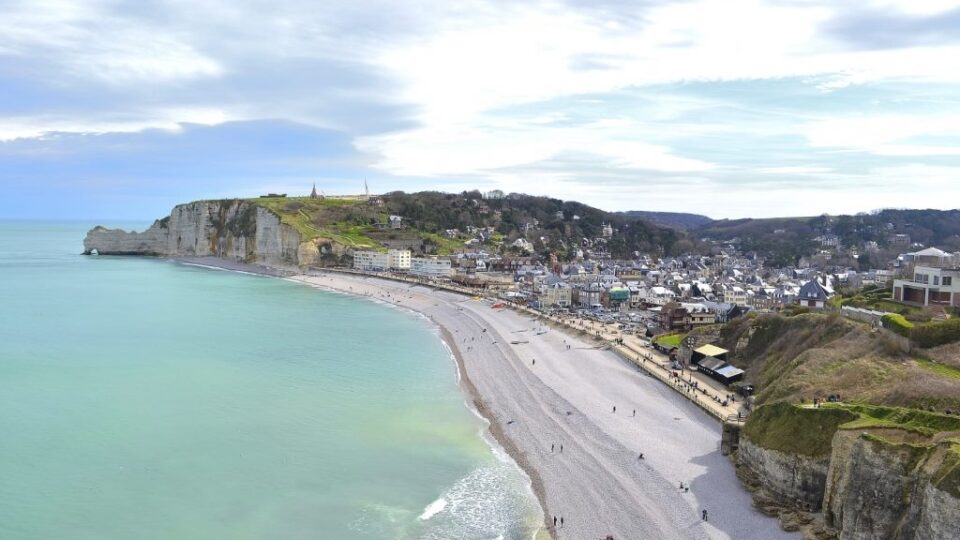 With its stunning, rich history and multifarious scenery, Normandy has much to offer tourists and other visitors. The French region has one of the country’s most popular tourist sights, Mont Saint-Michel, as well as phenomenal castles, impressive churches, and scenic ancient towns like Rouen.

The seaside resorts of Deauville and Honfleur are popular in the summertime, and the natural charm of Normandy’s coastline, meadows, and woodlands is an attraction on its own. Along the Channel coast, spectacular limestone cliffs make way into the ocean, while Lower Normandy is typified by lush, quiet valleys. A perfect pastoral area regarded as the Norman Switzerland (Suisse Normande) invites lovers of nature and outdoor sports.

For Second World War history enthusiasts, going to Normandy is significant. In the war, the region was massively hit by the German Occupation and was the base of the 1944 Allied landings. Visitors can check out the memorial museums; military cemeteries; and the D-Day landing beaches, including Arromanches Beach and Omaha Beach.

Here Are A Few Things Normandy is Famous For

A notable medieval pilgrimage destination, Mont-Saint-Michel is one of the top-rated spots in the country. Recognized as a UNESCO World Heritage Site, the Abbey of Saint-Michel has an element of myth as it soars over 100 m above the sea. The Gothic spire appears to touch the sky as the site invites visitors to traverse the Bay of Saint-Michel.

In the low tide, it is possible to complete a pilgrimage or guided walk to reach Mont Saint-Michel. In the high tide, the destination becomes an island that can be reached by a single road. The major attraction here is the Abbey Church, reached by mounting 200 m pedestrian way and another 350 steps to Mont Saint-Michel’s peak. Constructed in the 1100s, the stately and striking picturesque views of Mont Saint-Michel are matchless.

Strolling around the old town of Rouen, tourists will savor the historical ambiance found in the twisting cobblestone paths that are lined with half-timbered houses. At every turn, you will find Gothic churches, and many are jewels of medieval architectural accomplishment.

Claude Monet depicted Rouen’s dazzling cathedral in a collection of paintings that highlight the complex details of the cathedral’s frontals at various times of the day. The Gros-Horloge clock tower is another significant monument in Rouen. Culture enthusiasts should go to the Beaux-Arts Museum with its outstanding fine arts collection. The town is also regarded as the location where Joan of Arc was trialed.

Visitors can see the tower where Joan stood before her judges and the site where she was martyred. She has become a saint, and there is a contemporary church dedicated to her.

Also Read:
>>What Is Rouen Famous For
>>Is Rouen Worth Visiting?

Honfleur is one of the attractive towns in Europe, with its scenic old harbor on the Seine estuary. About 25 km away from Le Havre, it has atmospheric cobblestone streets and several old half-timbered houses. This port used to be where travelers embarked on voyages to Canada in the 1500s. And there is the 1500s Lieutenace building on the north side of the harbor too. It is the old governor’s house that was built on the remains of Honfleur’s old walls.

One of the town’s highlights is the Musee de la Marine (Maritime Museum), which is housed in the old Eglise Saint-Etienne. It was built between the 1300s and 1400s. The Maritime Museum chronicles the story of seafaring, shipbuilding, and fishing in Honfleur.

The Musee Eugene Boudin will be an easy pick for Impressionist art lovers. The museum features an expansive collection of 200 works. Half of the collection is Boudin’s paintings, while the rest are works by other Impressionist artists like Paul Huet, Eugene Isabey, and Gustave Courbet. There is also an extension that is dedicated to religious art; this annex is in Eglise Sainte-Catherine’s separate tower.

Near the English Channel in Lower Normandy, Caen was pivotal during the German Occupation of the Second World War. The town is a perfect base to tour the Normandy D-Day Beaches and Memorials. About three-quarters of Caen were ruined in the Allied landings of June and July 1944. Still, its historic churches survived almost whole.

Caen Memorial Museum (Memorial de Caen) tells the story of the Second World War, the D-Day Landings, and the Battle of Normandy. Under the museum is the site of General Richter’s HQ that was a post in the Nazi Occupation.

The museum is also the center for History and Peace in the region, which is geared towards educating the public and promoting the idea of reconciliation. It is located at Esplanade General Eisenhower, Caen.

>>Also Read: Things To Do In Caen

Bayeux and the Bayeux Tapestry

The Bayeux Tapestry is the most popular thing about the town of Bayeux. It is on display at the Bayeux Museum. A 1000s masterpiece of medieval art, the Bayeux Tapestry, a work of embroidery that is woven in 10 various shades from wool yarn. This 70 m-long work highlights the 1066 story of the conquest of England by William the Conqueror (Duke of Normandy) via the Battle of Hastings.

This work of embroidery is also referred to as the “Tapisserie de la Reine Mathilde” (‘Queen Matilda’s Tapestry”) in reference to William’s wife) and the “Toile de la Conquête” (“Cloth of Conquest”). Given its cultural essence as an artifact of historical documentation, the Bayeux Tapestry has been designated as a UNESCO “Memoire du Monde”. It displays 58 various scenes in magnificent detail, including 759 animals, 623 figures, and 37 ships and buildings, accompanied by a commentary in Latin.

You should also take time to explore the old town of Bayeux- a beguiling medieval world of half-timbered buildings, majestic mansions, and elegant townhouses. At the center is the well-kept Cathedrale Notre-Dame, one of the most ravishing examples of a Norman Gothic church. The sanctuary is built over many centuries, from the 1000s to the 1400s, so it mixes Romanesque with Gothic architectural features, including Flashy Gothic and Early Gothic styles.

Since the 1800s, Deauville has been Normandy’s foremost seaside resort. Today, it is still considered as one of the top beach destinations in the country. Visitors will find several kilometers of sandy shoreline and a boardwalk for seaside walks. From June to September, lifeguards are on duty daily. There are several amenities like lounge chairs, parasol rentals, and striped cabanas in this exciting beach destination.

You should also know that there are more things to do than just lounge and relax by the sea. Vacationers can take a break from sunbathing to exploring the trendy boutiques. They can get a spa treatment too or have a gourmet meal at one of the several chic restaurants.

The area around the resort offers visitors an opportunity to adore the seaside charm of Normandy. For visitors who would love to take a driving tour of the region’s coastline, the route that is a part of Côte Fleurie stands out. People visit for its alluring pastoral scenery, fantastic ocean views, and seafront villas ringed by flower-filled gardens. The Côte Fleurie spans from Honfleur for about 45 km to Merville-Franceville.

Étretat is a small town on Pays de Caux’s coast, just 30 km northeast of Le Havre. It is popular for its towering white chalk cliffs that reach heights of close to 90 m above the sea. One rock needle and three rock arches are especially worth seeing here; the Porte d’Amont and the Porte d’Aval can be viewed from beach Étretat, while the largest of the 3- the Manneporte- is situated farther south. The Aiguille d’Étretat is a 70 m needle rock that protrudes from the sea close to the Porte d’Aval. Étretat is situated 30 km northeast of Le Havre in France.

What is Normandy Famous For? – Summary

Normandy is a particularly beautiful region just north of the French capital. It is both a seaside and rural area that is popular for making excellent apple cider, cheeses, and seafood. Normandy’s cuisine quality is exceptional, as gourmets will confirm. Its historic heritage is so imposing that it is difficult to miss and interact with. Embark with friends or family for a tour through the best things to see and do in Normandy. It’s a special feeling. 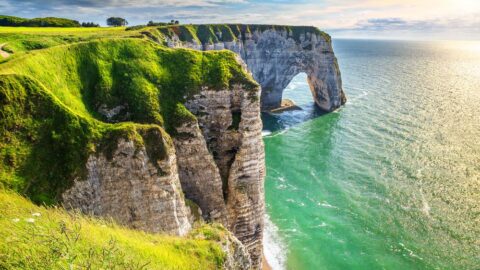 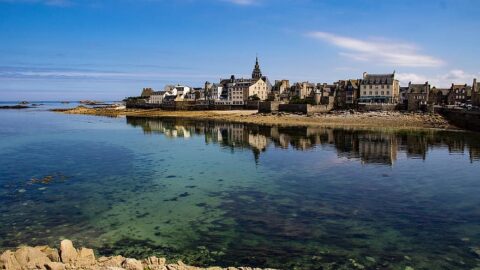 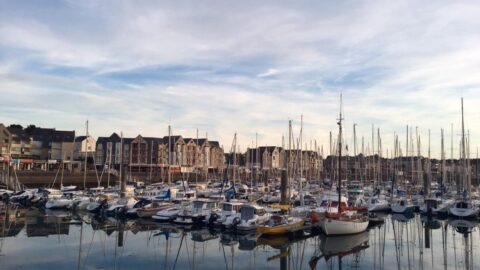 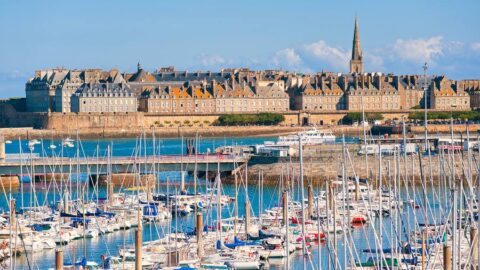 What is Brittany Known For?