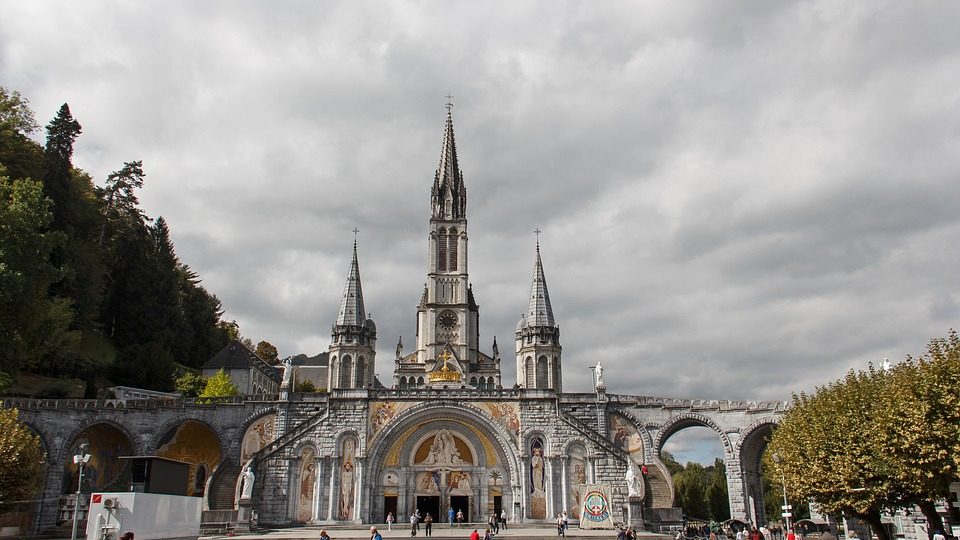 For those familiar with Lourdes in a way or more, the town ranks high among the places to visit in southwest France. Located in the foothills of the Pyrenees, Lourdes has long been a major city. Even prior to the popular appearances of the Virgin Mary in the mid-19th-century, the town was popular for its protected chateau on the outskirts of Lourdes.

Following Mary’s appearance to Bernadette Soubirous, the peasant girl, Lourdes emerged one of the world’s most visited pilgrimage spots, recording a current figure of 6 million visitors yearly. Bearing testament to its catholic pilgrimage credentials, people visit with the hope of being healed from the blessed water from the little cave. While some just visit the site where the Virgin Mary was spotted.

Here Are Some Places to See and Things to Do in Lourdes:

Pray at the Sanctuary of Our Lady of Lourdes

Religious tourism to Lourdes in incomplete without a visit to the sanctuary of Our Lady of Lourdes. Where Bernadette Soubirous experienced her spiritual visions have become an attractive spot for pilgrimage.

Bernadette Soubirous was a peasant girl who lived in the town of Lourdes, where she also herded sheep. She was a simple girl; she could not read or write. One day in 1858, while the 14-year old lass was gathering fire, she encountered the first apparition of a Massabielle, a young girl, in the grotto.

According to Bernadette, the young girl donned a white dress with a blue belt at her waist and golden roses at her feet. The first time she beheld the apparition, it did not speak to her. She attempted to tell the other adults what she saw, but no one believed. The last time she saw the apparition, it said: “I am the Immaculate Conception”.

Next to the Basilica, many tourists line to light a candle outside or immerse themselves in the pool to be healed. The sanctuary is located in 1 Avenue Mgr Theas, 65108 Lourdes.

Step in the Château Fort

Sitting on top of a rocky outcrop on the city’s edge, Lourdes’s only major non-religious attraction is the fortress of Lourdes. As visitors will observe, the ascent is a slope, but short and interesting walk. However, there is a lift, which is free for those who might find the steep difficult. Musée Pyrénéen, a museum displaying regional art and artifacts, is also housed in the Château.

Carry on to the most fascinating view over Lourdes, the close by Argalés Gazost valley, the Pyrennes’ peeks, and the town of Tarbes. Dissimilar to the Château, the trip up is not a short one, as it takes about three hours to complete. Therefore the suggested pathway is through the 100-year-old funicular railway.

The railway is a picturesque journey itself! Meanwhile, coming down is quite easier, with a family-friendly trip through an old railway track. The Pic du Jer also offers a splendid night view, and you should capture every moment on your camera.

Lourdes’s history revolves around Le Cachot in a spectacular fashion that draws in the crowd in their drove every year. It is a dreary prison where the Soubirous family spent a year behind its bars. Here, visitors can behold the petit 16m2 room that the family lived in during the period I which Bernadette Soubirous had her religious encounters. Le Cachot is located in 15 rue des petits Fossés, Lourdes.

Be Awed at Moulin de Boly

The birthplace of Bernadette Soubirous, also known as the Moulin de Boly, is situated in the center of the town. It used to be a water mill where she spent the first ten years of her life. In 2012, the place underwent renovation with a kitchen, water mill, and a bedroom added to the place.

For visitors who would love to know about the spot, there are informative tours available, offering a detailed account of the simple lives that peasant families lived at the period. For pilgrims, they would learn more about a substantial background of Bernadette’s time on earth. The Moulin de Boly is located at 2 rue Bernadette Soubirous, 65100 Lourdes.

This farm offers a terrific alternative for a day’s break from visiting touristy sites. Located in a beautiful setting of greenery, visitors can peep at and cuddle locally-reared animals varying in sizes.

It is great when you visit in conducive weather so you can play with loved ones in picnic areas, cafes, and indoor eating areas. Children will definitely love La Ferme as there many things to see and do. It can be found in Route de la Foret, Lourdes.

Witness the Extraordinary at La Source

La Source is where the supernatural meets the natural. The water source is where pilgrims approach for Lourdes’ storied liquid; a custom that originated from the Virgin Mary’s apparition to Bernadette Soubirous, during which the lass was told to proceed to the source, drink, and wash in it.

It might surprise visitors that this water is not categorized as holy water because it is yet to be blessed by a priest. Notwithstanding, there have been accounts that pilgrims got healed from different diseases after drinking it.

Not like regular stairs, the Holy Stairs are often climbed while kneeling. A clone of the stairs is in Rome, and they are part of the collection for a pilgrim’s delight in Lourdes. Visitors will climb 28 stairs; representing the step between Jesus and Pilate in the courts, before the former was sentenced to death on the cross.

When pilgrims climb the steps, they do so together with Christ’s suffering and endeavor to bring people closer to God in faith. It does not matter whether you wish to participate or not, as seeing the devotion showcased here is an experience that should not be missed.

Lit a Candle at the Candlelit

Since 1872, every night at 9 pm, a candlelit procession commences at the Prairie and ends in Rosary Basilica’s front. Pilgrims from both far and near carry the torches and candles and a statue of the Virgin Mary.

They would walk for about one and a half hours before a priest comes to bless. Ensure you arrive on time not to miss the fun. While visitors can be part of their rosary or choir, pilgrims start to gather at 8:45 pm.

A popular and significant part of a pilgrimage to Lourdes is the Way of the Cross, also known as Chemin de Croix, which is a pathway winding along the wooded side for 1.5 km. There, visitors will find 15 various stations representing the journey Jesus gets with his cross and 115 iron figures showing along the route. For the differently-abled people, a separate room is dedicated to them and made easily accessible.

Taking a ride around Lourdes in a small train is a fun thing to do. It helps visitors to have a unique view of the town from the comfort of their seats. In fact, some tourists take a little train tour to enjoy the town better. Le Petit train takes visitors around Loudes for about 45 minutes. They will see the streets, monumental spots, and iconic destinations without stressing themselves.

How to Get to Lourdes

To enjoy your trip to Lourdes, traveling from April to October will be a brilliant time to do so. You can fly in from almost anywhere in France. The closest airport to the town is the Tarbes-Lourdes airport, which is a 15-25 minute vehicle drive to the town center.

In the case that you are traveling from within France, bear in mind that only a few airplane lines fly into the airport. Ryan Air and Air France Hop are the major lines in Europe that fly the airport. You can fly to another city if you are coming from anywhere else in the world, you may want to fly into another city to transfer to a Ryan Air/Air France Hop plane to proceed to Lourdes.

Things To Do In Lourdes – Summary

Lourdes has great hotels and resorts to relax and wonderful views to take in. It is like meeting with nature in a way you have never done before. The town offers unflinching hope to the sick thanks to its pilgrimage credentials that have gripped lots of people from different cultures and backgrounds. Lourdes is indeed the miracle of southwest France.