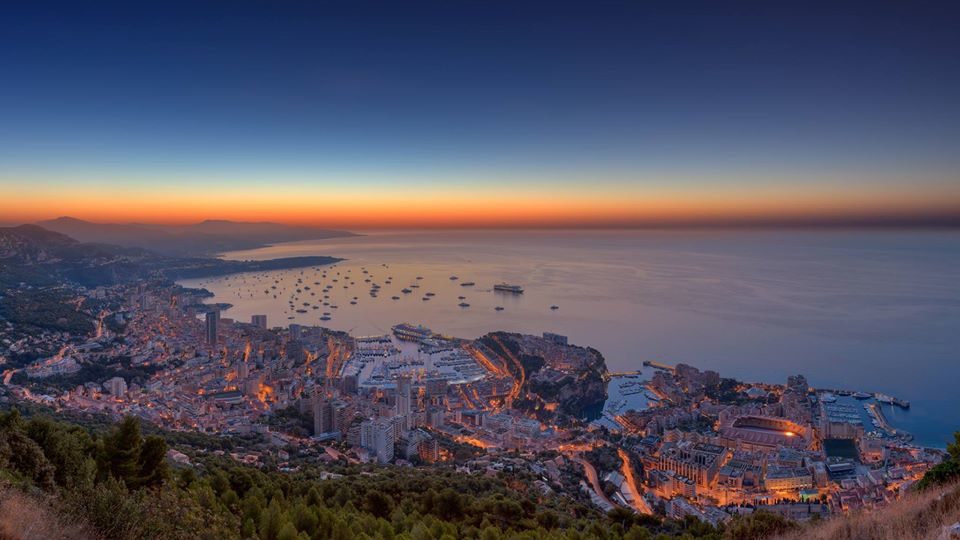 We are devoting this article to a tiny monarchy: the Principality of Monaco. It is only the size of a postage stamp on the map of Europe, yet also inseparable from France. When visiting the French Riviera, one must make a stop at this exceptional city-state that is only twelve miles east of Nice; Monaco. “The Rock”, a land steeped in history, the envy of many for centuries and also a Mediterranean mini Las Vegas.

Here Are Some Facts About Monaco

In 304 A.D., Corsica – a rugged island off the French and Italian coasts – was a Roman trading post. It was governed by a cruel man known as “the Barbarian” who persecuted Christians. One of his victims was a young girl named Devota. He had her mouth crushed, then had her dragged through rocks and brambles. She suffered greatly and died from her injuries. The Barbarian then ordered her body to be burned according to the pagan rite. But priest Benedict and deacon Apollinaris took possession of the young martyr’s body and snuck it onto a boat bound for Africa, where Christianity was flourishing.

Unfortunately, after having rowed all night, the men fell asleep, and the south wind pulled the frail vessel towards the coast of Liguria, to the territory known today as Monaco. The men awoke at dawn to see a dove escape from the wounded mouth of the Saint. They followed it to the valley of the Gaumates, where they buried the body. A charming little church was built in this sacred place, and Devota became the patron saint of Monaco. Every year since then, on January 27th, in the presence of the sovereign family of the Principality, a fishing boat is burned, and a white dove symbolizing her spirit is released.

The Much-Coveted Rock of Monaco

This rock, standing tall and unaffected by the fury of the elements, has always impressed those who have come to it and thereafter referred to it as “The Rock”. From the time when it was still called “Monoïkos”, this land belonged to Ligurian tribes who controlled several city ports of the south of France, including Nice. At the height of its glory, the Roman empire appropriated this territory to make it a trading station. It was then repeatedly besieged by the barbarians and invaded by the Saracens, before becoming German property in the twelfth century. Frederick Barbarossa, emperor of Germany, offered the sovereignty of Monaco to Genoa, and so it became Italian. But at the time, Italy was divided into two violently warring factions, each claiming possession of this territory: the Ghibellines, allied with the German Empire, and the Guelphs, who were fierce defenders of the Pope’s authority.

The Grimaldis were a great Mediterranean family. They were prosperous businessmen, as well as clever politicians. Several consuls and ambassadors of Genoa bear this illustrious name. Rooted in Monaco, they were Guelphs who were forced into exile when the Ghibellines took over power in Genoa, in 1295. Under the Ghibellines’ rule, the little Monegasque territory became a true pirate’s lair. But François Grimaldi’s ruse allowed the family to take back The Rock on Christmas eve 1297: he disguised himself as a monk and while all the inhabitants were at church, took the guards by surprise which enabled his troops to penetrate the fortress. He thus gained the nickname of “Malizia” (the Cunning), and since that memorable day, the Grimaldis continued to consolidate their dominion, even though they still had to defend their supremacy for centuries. This family still reigns over “The Rock” today…

Albert I, Learned Prince and King of the Oceans

Prince Albert 1 was a remarkable statesman, as well as a great scientist. He was an early oceanographer fascinated by the maritime world. At the age of 25, traveling on board his ships, the Hirondelle and Princess Alice, he undertook numerous expeditions, which earned him the nickname of “King of the Oceans”. His contribution to oceanography was such that in 1909 he was elected to the Academy of Sciences in France, and several years later, to the Academy of Medicine.

It is thus that “the King of the Oceans” became “the Learned Prince”. The erection of an Oceanographic Museum in 1986 was the culmination of his life’s work. Its impressive façade majestically engages the sea. It was Commandant Cousteau who continued the work of Prince Albert 1. This museum, unique in the world for the richness of its collections and its many aquariums of rare and exotic species, is the most visited cultural site of the French Riviera.

At the beginning of the twentieth century, the director of the Automobile Club of Monaco, Anthony Noghès, came up with a far-fetched idea: to organize a Formula 1 motor race in the streets of the Principality. With the aid of a famous Monegasque pilot, Louis Chiron, he imagined a particularly complex course: the sportsmen had to drive through streets – sometimes narrow, sometimes wide, punctuated by hairpin curves and occasionally interrupted by tramlines – at more than one hundred and fifty miles an hour. The Englishman Williams Groover won the first Monaco Grand Prix in 1929.

The Monaco circuit is still today considered one of the most formidable automobile challenges in the world. It is said that winning this race redeems one for all prior defeats. Each weekend of the Ascension holiday, hundreds of thousands of spectators from all over the world come to this rendezvous of emotion and festivity when the quiet, sunny streets of Monaco, come to life with the noise of the roaring motors.

A Street as Border Line

After having been in turn Roman, Germanic, Italian, and Spanish, the Principality of Monaco is today so enmeshed in the territory of France that its border is sometimes surprisingly unnoticeable… In fact, it is not a border checkpoint that separates the French communes of Beausoleil or Cap d’Ail from that of Monte Carlo. Today, one passes from one territory to the other by simply crossing a street. For example, at Beausoleil, the “Avenue Général Leclerc” side of the street is French. The opposite side, “Boulevard de France”, is in another country, since it is in Monegasque territory.

A bit confusing…but, is it really foreign? People speak the same language in both countries; as a matter of fact, the French and Monegasque education programs are identical. Where then lies the attractive difference between the two? It is an invisible one: the Principality of Monaco is more than just a fiscal paradise – it is also a real banking, fiduciary, and judicial one. Truth be told, the Monegasques pay no tax on income or on wealth, their country’s legislation accommodates off-shore companies, and transactions are processed anonymously.

Monte Carlo, the “Las Vegas” of the French Riviera

The Principality of Monaco has two main parts: Monte Carlo and Monaco. Mid-19th century, Monte Carlo was pretty far from being the symbol of style, luxury, and active nightlife that it is today. Back then, it was just a lovely peaceful place on the French Riviera, with an economy based on agriculture and fishing. Prince Florestan and his wife Caroline purchased this magnificent unspoiled region for a very moderate sum. Their plan was to open a casino and develop luxury hotels deserving of the great European bathing resorts.

A daring but successful bet! Soon after, the world’s rich and powerful appeared to be seen and take their chances on the tables. In the main lobby of the Grand Hôtel de Paris, there is a pretty interesting marvel: a bronze equestrian statue of Louis XIV, with a very strange shine on the horse’s knee. There is an interesting ritual behind this: it is a tradition for the players to touch this knee for good luck before hitting the Casino, and in so doing over the course of many years, they have imparted a high polish to it.

The Principality of Monaco is made up of five neighborhoods: the Grimaldi palace sits proudly on “The Rock”, a limestone peninsula seven hundred meters long, sixty meters high above the sea; “la Condamine” – the port district; “the Fontvielle” quarter which was completely built out over the sea and is known for its celebrated sports stadium; “the Moneghetti”, where the exotic garden is found; and “Monte Carlo” where the famous Casino is located.

These are visits not to be missed! Park your car and wander along the narrow medieval streets to visit the palace and witness the changing of the guard every day just before noon. But beforehand, when arriving from Nice, do stop at the Monaco Exotic Garden, one of the natural marvels of Europe. It offers an unparalleled view overlooking the city and the Monegasque coastline. In Monaco, all is refinement, luxury, and elegance… you are guaranteed an unforgettable and enchanting experience!