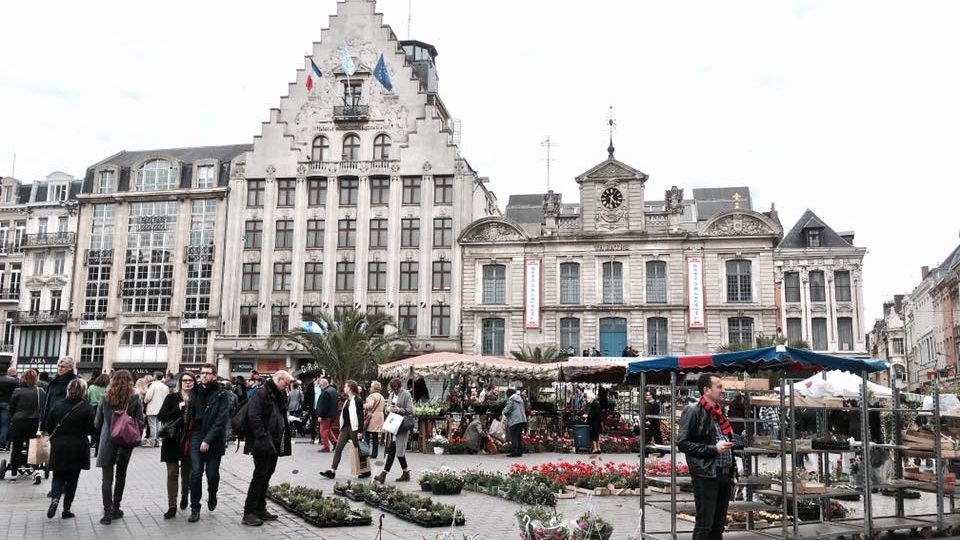 This month we have chosen to dedicate the newsletter to a new European crossroad. Located a mere one hour from Paris, 2 hours from London, 2 and 1/2 hours from Amsterdam and only 30 minutes from Brussels, the northern region of France and its capital, Lille, are certainly not without charm and deserve a visit while traveling through Europe.

A Dream: Linking England to the Continent

For more than two centuries, an immense challenge stimulated the imagination of engineers. How could we link the European continent with England? More than one hundred projects, some more crazy than realistic, were presented. The oldest one dates back to 1750. At that time, Nicolas Desmarets, a geologist, thought that it was very possible to join the two countries; their coasts are easily seen on a clear day. He proposed the building of a bridge or the digging of a trench or tunnel.

The idea of placing tubes at the bottom of the ocean a simply floating in the water, was also considered. In the middle of the nineteenth century, Tomé de Gammond named the “father of the tunnel”, presented the first credible solution. In 1855, he dove 100 feet into the ocean to inspect its floor. He planned to submerge thirteen small artificial islands with wells to ventilate the tunnel. In 1880, a 30-foot engine, mounted on tracks, started the digging.

A Reality: An Enormous Challenge

As the dream closed in on reality, the military from across the Channel suddenly considered that England’s risks were enormous and imagined catastrophic scenarios, most of which were simply crazy. They suddenly announced that armed French invaders would enter their country disguised as simple tourists. The invaders would overtake the tunnel and penetrate into the country, and although more than 12,000 feet of tunnel had been dug, the work was halted. The following years were punctuated by numerous hesitations.

It was only after the end of the Second World War that the opposition to the tunnel finally disappeared. It would, however, have to wait until the Franco-British summit of 1981 for the construction project to get underway; in 1986 the proposition of a rail tunnel was definitively confirmed. Gigantic tunnel excavators would dig without stop, day and night, for more than 4 years, to finally allow the junction to be established on December 1st, 1990. The total length of the tunnel would reach 30 miles, 23 of which are under the English Channel. On May 6th, 1994, the tunnel was finally inaugurated and opened.

Legend has it that in the year 620, a giant named Salvaert, Prince of Dijon, and his wife Emergaert attempted to flee the county of Burgundy and seek refuge in England. At the point of crossing the sinister Sans Mercy (No Mercy) Woods, the hideout of the tyrannical giant Phinaert, they fall into an ambush. Salvaert and his escorts are brutally assassinated. Emargaert manages to escape and finds sanctuary with a hermit. She soon gives birth to a son and has just enough time to hide the baby before she is taken by Phinaert’s men. The hermit finds the baby, names him Lyderic, and has him nursed by a doe.

As an adolescent, Lyderic learns about his birth and decides to avenge his father. On June 19th, 640, he is victorious in a duel, finds his mother, his prestige, and inherits Phinaert’s goods, of which the castle of L’Isle is part, and settles there. Tradition allows Lyderic to become the first Count of Flanders and the founder of the city of Lille as it is around the castle that the city will develop in the eleventh century.

Over the course of many centuries, Lille was conquered by the Flemish, the French and then the Spanish; before being returned to the French due to the marriage between Louis the Fourteenth and the infanta Maria Theresa of Spain in 1667. Today’s architectural richness is thanks to these many invasions, and we recommend you visit this magnificent city; styles and eras intermingle on a daily basis there. The “Grand Place”, the historic center of Lille, with its many terraces, packed Day and night, is the usual rendezvous of the locals and tourist alike. Four statues dominate this plaza.

In the center is the goddess, solidly placed on its pedestal and seems to dominate the crowds. She commemorates the heroic defense by the people of Lille against the siege of the city by the Austrians in 1792. In her right hand, she holds the “boutefeu”, ready to light the canons to defend the city; while in her left hand, she shows the inscription on her platform, which reads: the absolute refusal by the mayor to surrender his city. Three other women covered in gold leaf surround the central statue and symbolically represent the three provinces of the North/Pas de Calais region; Flanders, Artois, and the Hainaut.

This huge fair is not to be missed if you are in the region during the first week of September. It is a very significant occasion in the life and culture of the residents of Lille. During three days of celebration, the city abounds with festivities. Most of the city’s streets are given over to the strollers and all, professional or not, take up a bit of the sidewalk to sell their merchandise or more simply to get rid of what they no longer want.

It is unquestionably one of the most extensive flea markets in Europe, which stretches for over 200 kilometers of sidewalk. The origin of this fair dates back to the Middle Ages, an era when the valets and chambermaids of the nobles were given the opportunity, once a year, to sell old garments and objects of their masters. This market would not be complete without the traditional mussel-fries, unique menu which is served by the many restaurateurs and which is appreciated by all. Several tons of mussels are consumed that Day!

Gangster and Policeman, Reality and Fiction

When one reads “Les Miserables” of Victor Hugo, one is immediately moved by the generosity, sensitivity, and mischievousness of the hero, Jean Valjean. To create this fictional character, the author was greatly inspired by a man born not too far from Lille; Eugene François Vidocq. Born in Arras in 1775, his life was somewhat astounding. Stripped by local thieves of the money he had himself stolen from his father in order to pay his way to America, Vidocq started a life of robbery, associating himself with various crooks. Finally arrested and condemned to hard labor, he managed to escape after 6 years in prison. Tired of the vagabond lifestyle, he offered his services as an informant to the police in exchange for his freedom.

He revealed himself to be quite capable in this job, and with the help of other past thieves, he allowed law enforcement to arrest many criminals. Because of this, he was named the first chief of security of Paris in 1811. Philanthropist and generous, he never forgot the downtrodden and tried to help them as much as possible. And so Victor Hugo is said to have used the life story of this particular hero to write about his legendary character, and it also inspired other writers such as Henry Melville in Moby Dick and Charles Dickens’ fugitive in Great Expectations.

We will soon be celebrating the Day for Sweethearts. We wanted to find the origin or rather origins of this celebration and have chosen the most common one agreed upon by various historians. Valentine’s Day dates back to Roman times when pagan festivities were organized each year in honor of Lupercus, God of shepherds and flocks.

This feast marked the first Day of spring and fertility in ancient Rome. This, however, greatly displeased the primitive Holy Fathers of the Church. In their own right, decided to initiate their own holiday in honor of a Roman priest named Valentine, who lived under the reign of Emperor Claude II (3 centuries AD). The Emperor had engaged Rome in numerous bloody and deadly battles and had forbidden all young men from marrying. In fact, he deemed that bachelors made better soldiers. Valentine disobeyed these orders and married young couples in secret. He was executed on February 14th, 269 (or 270), and then canonized. Valentine’s Day is to be celebrated in his honor.

Whatever its origin, Valentine’s Day remains a tradition that sweethearts love to celebrate. In Lille, like everywhere else, lovers will certainly not avoid it. If you have the opportunity to travel in Europe and your itinerary leads you to Lille, do not miss this wonderful city, you will not be disappointed. Not only is Lille an interesting metropolis, but also its citizens are particularly warm and friendly. As a French songwriter sings in one of his songs; “the people from the North have in their hearts the sun that they do not have outside”. 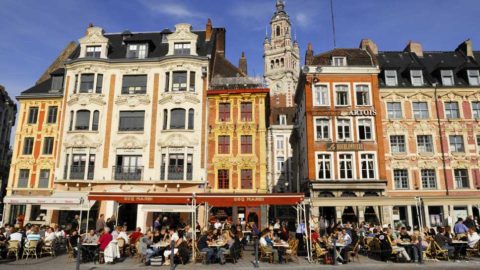 What is Lille Famous For 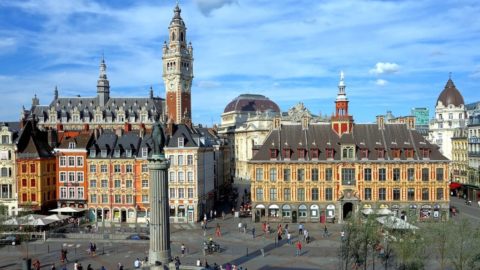 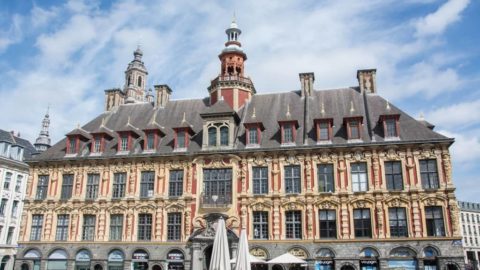 Is Lille Worth Visiting? 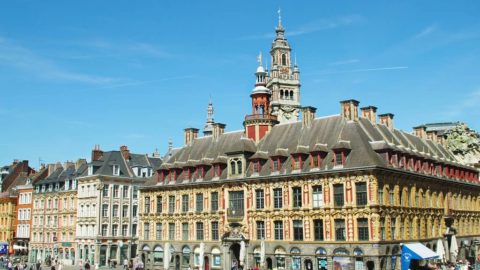