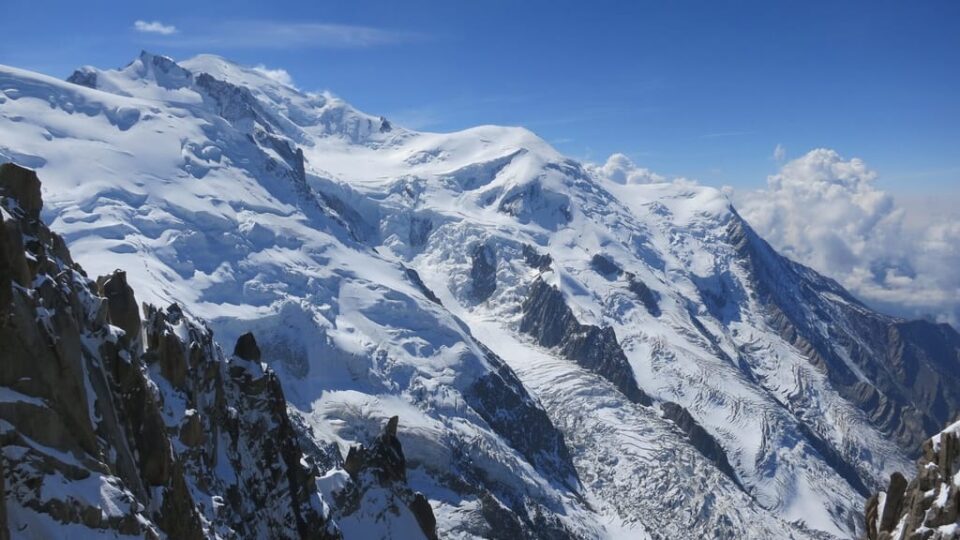 Also called the ‘White Mountain’, Mont Blanc is Europe’s second-largest mountain trailing Mount Elbrus. It prides itself as the Alps’ highest mountain, towering 4,808 m (15,774 ft.) above sea level. Occupying a range, the Graian Alps, the mountain stands between Aosta Valley (Italy) and Savoie and Haute-Savoie (France). Despite its concerning fatality rate, climbers from different parts of the world come to France to experience all that the White Mountain has to offer.

Where Mont Blanc’s peak is situated is right on the divide between the valleys of Veny, Ferret, and the valleys of Montjoie and Arve. The mountain is widely known for its outdoor activities like hiking, trail running, climbing, and winter sports like snowboarding and skiing.

Here Are Some Things Mont Blanc is Known For:

Mont Blanc’s peak is a solid perennial ice-and-snow dome with a varying thickness. While no permanent and exact summit elevation can be determined, accurate measurements have been made on certain dates. For a long while, the summit’s official elevation was 4,807 m (15,771 ft.). Expert surveyors and the IGN (French national institute of geography) measured it to be 4,807.40 m (15,772 ft. 4 in) with the aid of GPS technology.

A team of scientists measured the height again on September 6 and 7, 2003, after the heatwave in Europe. The team comprised of Luc Moreau (glaciologist), 3 personnel from the IGN, 2 surveyors from the GPS company, 4 mountain guides from Saint-Gervais and Chamonix, 7 expert surveyors, and 4 students from different institutes in France. The team reported that the 4,808.45 m (15,775 ft. 9 in) is the elevation, and the summit was 75 cm (30 in) away from where it was reported to be in 2002.

Over 500 points were measured after these were published just to analyze the effects of climate change and the changes in the mountain’s height at varying points. The mountain’s elevation, since then, has been measured biannually.

At the peak of Mont Blanc, the wind speed can reach 150 kph, and temperatures can go as low as -40 °C. Even in the summer, they seldom rise above 0°C (32 °F). All precipitations drop in the form of snow from the altitude of 3,700 m. And in contrast to what many people say, snowfalls are much in the summer than in the winter. This is because the cold air does not have much humidity.

Beautiful Views From the Summit

From the peak, the view spans four mountain ranges, as earlier noted: the Jura, the Vosges, the Black Forest (Germany), and the Massif Central. But it is difficult to recognize these mountains even in hot sunny weather. Experts have concluded that this is because of the pollution coming from the plains and the absence of wind. Also note that as the crows fly, visibility can be reduced. From different places in Mont Blanc, you can see Mont Blanc. From the Ballon d’Alsace in the Vosges to Lyon, Dijon, Geneva, and Grenoble.

This is a mountain railway line that leaves from the railway station of Le Fayet in the small town of Saint-Gervais-Les-Bains. This widely-known tourist attraction was completed in 1914 and is 12.4 km long. Formerly worked by steam locomotives, the line was later electrified in 1956. The three coaches were named after the three daughters of the line’s owner (Marie, Anne, and Jeanne) at the period of electrification. Today, it is managed by the Compagnie du Mont-Blanc, who also operates the Aiguille du Midi cable-car and the Montenvers train.

Reaching 2,386 m, the Nid d’Aigle offers a beautiful view over the Bionnassay glacier from where well-equipped and experienced climbers can progress to the tents of Gouter and Tete Rousse to begin the Mont Blanc ascent.

This 170 km trail is a walking one that surrounds the Mont Blanc massif via Chamonix (France), Courmayeur (Italy), and Martigny (Switzerland). It often takes 7-10 days to cover the whole distance of this round route that traverses seven valleys around Mont Blanc: the Chamonix valley, the Vallee des Glaciers, the Montjoie in France; Val Ferret and Val Veni in Italy; Swiss Val Ferrer, and either the Trient valley or the Arpette in Switzerland.

Getting accommodation along this route is possible, while the travel guidebook can be broken into parts to fit anyone. Col des Fours in France is where you will see the trail of the highest points. There are also a few at Fenetre d’Arpett in Switzerland. Both have an altitude of 2,665 m. Some sections of the trail can be covered in snow even in summer. If you plan to hike here, do not forget to take heavy-duty waterproof jackets and crampons at all times.

Part of Mont Blanc’s popularity is this village. Many alpinists do settle here while they explore the region, including the mountains. Two English aristocrats who discovered it in 1741 placed the village on the map. The alluring alpine village called Prieure de Chamouni, circled by magnificent snow-capped mountains, enamored them.

In 1770, Chamonix’s first inn was opened when people gradually began taking part in mountaineering. It would not take long before visitors came in their droves to the village to the special summits. The maiden hotel was established in 1816, with more to follow later in the 19th-century.

In Napoleon III’s reign, the road access to the village was developed, and railways were commissioned. Visitors could visit Chamonix with ease, even in the winter, making it the choicest alpine destination for winter sports.

Showcasing history, the village’s architecture is a blend of modern and traditional. Explore the town and unravel the nice Baroque churches, quaint chalets, and historic Protestant chapels. A lot of visitors lodge in luxurious modern hotels, but you will find bucolic country lodges too. The village is famed for its chic boutiques and upscale ambiance. Chamonix also has tens of high-class restaurants- from regular cafes and brisk brasseries to cool dining outfits.

The Aiguille du Midi is one of the highlights of Chamonix and is regarded as the gateway to the Alps. This point is reached by the scenic Mont-Blanc Gondola. From the center of the village to the summit, this two-part cable car ride will take about 20 minutes. Spare two to three hours of the whole trip (and longer if you will pause for food). For the first part of the ride, it will reach the Plan de l’Aiguille at 2,310 m. Here is the departure spot for the Grand Balcon Norn hike to Montenvers.

At the height of 3,777 m is the second part of the ride to the Aiguille du Midi peak. Ensure that you wear sunscreen and warm clothes and do not forget sunglasses. With 360° views of the French, Italian, and Swiss Alps, this great spot has terraces. You can also find another lift that courses over the Glacier du Geant to reach the Pointe Helbronner peak terrace at 3,842 m.

The Protected Area of Mont Blanc

The Mont Blanc massif is a protected area that boasts of 25 animal species (including ibex, chamois, alpine chough, and marmots) and 45 different plant species. Wildlife is conserved here, but for many years, this place has been a subject of disputation. There is a conflict between those who want to unduly exploit the resources for touristic and economic reasons and those who wish to conserve the site against massive incursions by careless visitors.

What is Mont Blanc Famous For? – Summary

With an altitude of close to 5,000 m, Mont Blanc is one of nature’s amazing sights. Despite the disputation of how to visit there, tourists can savor the views and scenery on different hiking trails. And if that sounds strenuous for you, there are the gondola lifts to take you around. There is so much to see and do here and around it. Mont Blanc is unique because there are lots of options for intermediate hiking around it. To enjoy the challenging ascent to one of Europe’s highest mountains, caution is advised.

>>Also Read: Where Can You Go Skiing in France? 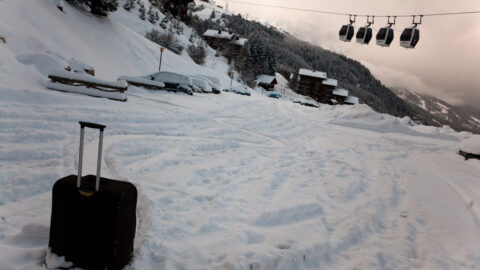 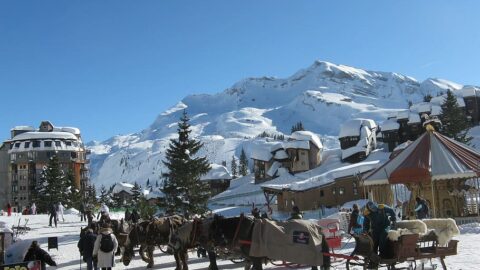 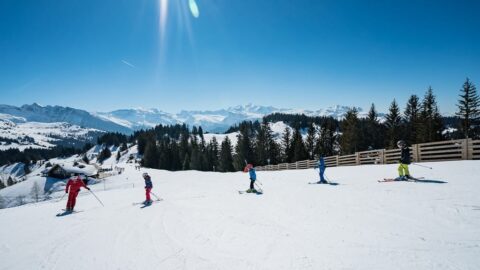 Is Les Gets Expensive? 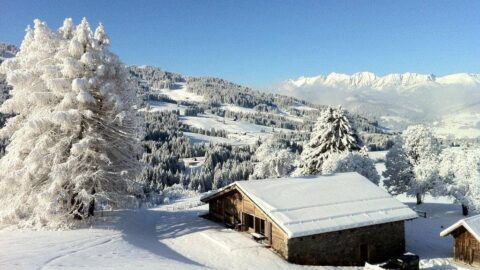