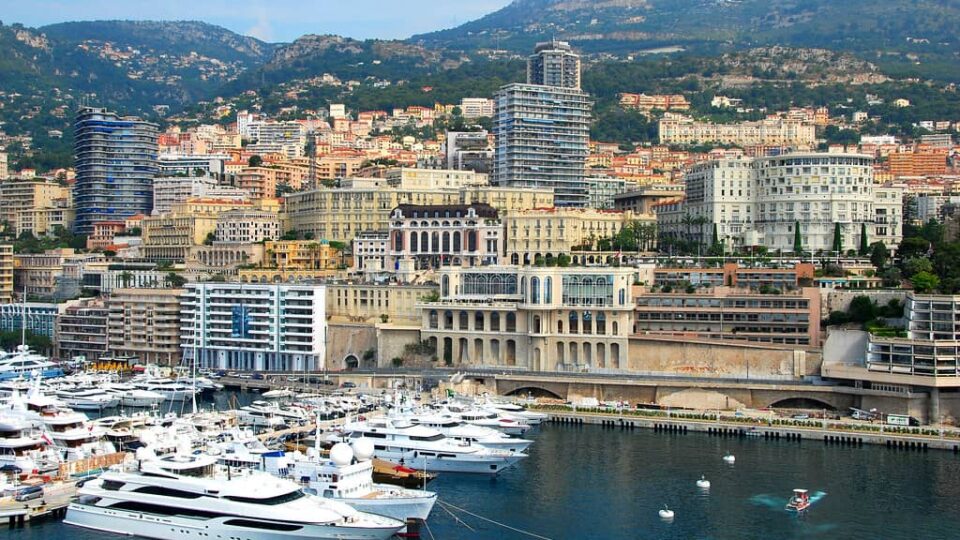 Dazzlingly beautiful and sparkling, Monaco is a small royal principality on the Cote d’Azur. Not more than two square kilometers in size, the country is probably the most exciting tiny swath of land on earth. There is an alluring quality to the sights, with its vibrant flowers, deep blue sea, and magnificent palm trees.

However, the most captivating feature of Monaco is the steep, rocky peninsula extending into the Mediterranean, called Le Rocher, which features historic Monaco (Monaco-Ville). Crammed with seductive, narrow streets, Monaco Ville has been standing since the 1200-century, around the time the principality was founded.

A spot of incredible natural beauty, Monaco has the blossoming vegetation and balmy weather of the French Riviera. It is just a 30-minute train ride from the city of Nice but has another world’s ambiance. Also known to have the continent’s highest per capita income, Monaco gives off an air of largess as seen in the upmarket hotels, luxury yachts, and rich restaurants.

Here Are Some Things That Monaco is Known For:

Delve into the extravagant world of Monaco, where exuberance and luxury are cultural. Even though its size is small, Monaco is filled with a large amount of glam. Monte Carlo is the area with the ritziest atmosphere, is an environment of spectacular natural beauty. Monte Carlo sits on a rocky ridge to Port of Monaco’s north.

There are awe-inspiring seaside views from the beautiful terrace of Place du Casino. As the principality’s wealthiest area, Monte Carlo charms the rich and famous. ‘Fine people’ and Ferraris settle in this district. For visitors, Monte Carlo is a brilliant place to savor fine dining or people-watch.

Food lovers can choose from about three Michelin-starred restaurants and many other incredible options. The area is intersected by two gorgeous boulevards; the Boulevard des Moulins at its southwestern end and the Boulevard Princesse Charlotte in the west. There are a lot of fashionable streets like the Avenue de pa Costa where you can do some luxury shopping.

>>Also Read: What is the French Riviera Known For

Situated in a distinct position high above the sea on Le Rocher, the Palais du Prince hosts the world’s oldest monarchy. In 1297, the Genoese noble family of Grimaldi founded Monaco after seizing the land from the Republic of Genoa. Initially built in the 1200s as a Genoese fortress, the site offers stunning views that provided protective shelter in the Middle Ages. Throughout the centuries, the fort was renovated and converted into a luxurious Louis-XIV-esque palace.

The Palais du Prince’s State Apartments is a private residence but is open to visitors at particular periods of the year. Tourists can see the princely Italianate gallery embellished with the 1500s and 1600s frescoes; the sliding ‘Blue Room’ containing a beautiful décor of gold and blue; the Empire-style ‘Throne Room’, that has a resplendent Renaissance fireplace; and the wood-paneled Mazarin Room.

The State Apartments also has the Main Courtyard and the 1600s Palatine Chapel, with its large 1600s Carra marble double staircase. On some Sundays and Thursdays in July and August, the Monte Carol Philharmonic Orchestra plays classical music concerts in the main courtyard.

The Changing of the Guard is another tradition of the Sovereign House, holds every day at 11:55 am in the palace’s front. The Compagnie des Carabiniers is the ceremony’s name. It is managed by the highly professional Palace Guards in tandem with the Orchestre des Carabiniers du Prince military brass band musicians.

This fascinating museum is located in a unique location on Le Rocher, nearly 90 m above sea level. In this spectacular setting, the Musée Oceanographique and aquariums lie on large foundations that were built for 11 years. Here, visitors can see the oldest aquariums in the world, which Prince Albert I commissioned and opened in 1910.

The major attraction at the Museum of Oceanography is its aquariums featuring rare species of marine life and fish in fascinating colors and shapes. The Tropical Aquarium, Shark Lagoon, and the Mediterranean Aquarium are the three times of Aquarium here.

Over 6000 specimens swim around in about 100 pools, rebuilt as their natural habitat- containing coral reefs. Visitors will also find a Turtle Island and a Touch Tank where they can stroke a starfish, hold a baby shark, or feel a sea urchin. On La Terrasse Restaurant on the rood terrace, savor sublime views of the sea and coastline. And on a clear day, you can see as far as the Italian Riviera. The museum is located at Avenue Saint-Martin, Monaco-Ville.

One of the satisfying things to do in the principality of Monaco is to visit the impeccably scenic Jardin Exotique. It is a garden situated in the Fontvielle area of the principality in front of the historic center. At 63 Boulevard du Jardin Exotique, visitors who came in by car can park in the parking lot just atop the gardens.

Located on a cliff that looks over the Mediterranean, the Exotic Garden is a luxurious spot with blooming vegetation and a spellbinding sea scenic. Given its constant sunshine on this hillside and the balmy weather, tropical plants can thrive. Opened to the public in 1933, Jardin Exotique features a monumental variety of species from Africa and the United States to Mexico and Latin America. The gardens are delicately tended and courses along the rocky mountainside.

The garden also features an Observatory Cave crammed with stalagmites and stalactites. Prehistoric humans used to live in the cave’s setting. For interested visitors, guided tours of the cave are available every hour from 10 am. The Anthropology Museum in the gardens is another interesting place to learn more about the history of early civilization and the prehistoric period. It contains a collection of ornamental objects from the pre-Roman and Roman era, as well as coins. You will find Jardin Exotique at 62 Boulevard du Jardin Exotique, Monaco.

Every year, the popular Formula One Monaco Grand Prix Race is held in Monte Carlo on May’s last weekend. The event is the world’s only car race that is held on city streets. The course spans from the Boulevard Albert 1 toward Place du Casino and around the challenging turn in the front of Monte-Carlo Fairmont Hotel.

Managed by the Automobile Club of Monaco, the event is one of the most famous sporting events in the world. The constricted streets are not suited for the race cars, whereas the race continues just for the sake of tradition (recurring since the early 1900s). It is quite hard to get a good view because of the crowd, but the atmosphere is glorious. The Cannes Film Festival is another big May event on the French Riviera.

The principality of Monaco is widely famous got its fine-dining settings that look after discerning customers. The chic restaurants are curated for food lovers who appreciate the brilliant meals that money can get. For the gourmands who are ready to splash money, there are many topnotch restaurants to visit.

The most popular one is Le Louis XV restaurant that has three Michelin stars and hosts Alain Ducasse’s Haute Mediterranean cuisine, made with the freshest of traditional ingredients. Then there is also the Joël Robuchon Monte-Carlo, which has two Michelin stars. Situated in the rich Hotel Hermitage Monte-Carlo, Le Vistamar has a single Michelin star and affords unique modern cuisine, presented on a terrace that looks over the sea.

What is Monaco Famous For – Summary

Monaco is just 2 square kilometers in area and less than 4 kilometers end to end. Therefore, no accommodation option is inconvenient for sightseeing. Amongst others, the principality is synonymous with fast cars, casinos, and luxury. That is why when you visit, you will see the very best of Cote d’Azur.